Get ready for a soft landing in lodging

It ceases to amaze me that just a few short years ago the hotel industry across the U.S. was, for the most part, on life support.

Perhaps most owners of commercial real estate felt this way. Consumers were all but nonexistent, group and corporate travel had been paired to nothing, resorts were virtually giving rooms away, loan delinquencies were at historic highs and owners of hundred-million-dollar hotels were mailing their keys back to their lenders.

Fast-forward a half-dozen years and our industry is on the verge of setting records in both national occupancy and average daily rate, consumer demand is at an all-time high, and we will go from a virtual standstill in new construction to a peak development phase unseen in recent history.

Hotel investors who bought into the euphoria between 2010 and 2015 reaped unheard of returns (think Hotel 1000).

To say things are strong in the hotel space is an understatement, but as with any segment of commercial real estate there are always storm clouds on the horizon.

As 2015 came to an end, hotels across the U.S. reached a milestone never seen: annualized occupancies exceeded 65 percent and the average daily rate was $120, according to PKF Hospitality Research and Smith Travel. Here in the Northwest, both Seattle and Portland reached unseen levels of 76 percent at $150 and 74 percent at $128, respectively.

With that said, for the first time since 2009, both PKF and Smith Travel expect a slowdown in year-over-year RevPAR growth both regionally and nationally.

It is difficult to continue to make such predictions and postulate over the enormous success of our industry without thinking about when it will end — especially given the current forecast that growth (albeit slower) will continue for the foreseeable future!

Recent sales transactions in Portland, Bellevue and Seattle that have set all-time highs on a price-per-room basis suggest investors don’t believe it will end soon. How often can a hotelier buy and sell a hotel in the space of 18 months and return over $1 million a month to its investors?

Consumers willing to pay upwards of $500 a night in the summer for a Seattle hotel also suggests the balance continues to tilt toward the hotelier. 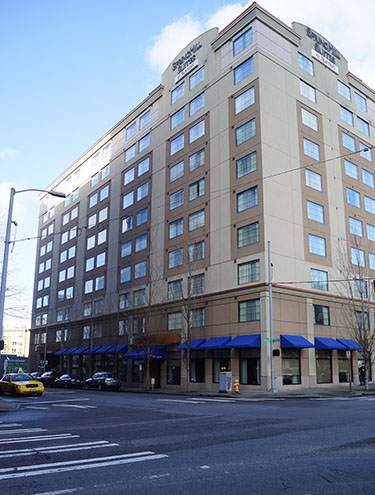 Coupled with ongoing demand for hotel development sites and regular announcements of new hotels, perhaps there is no end to the greatest growth in the Northwest hotel space in recorded history. But that would be foolish as we all know.

Even the youngest consumer understands the simple economic theory of supply and demand, and we all have borne witness to the one truth that what goes up, must eventually come down. We tend to forget this euphemism in our hour of euphoria, but eventually someone will be left without a seat as the music stops.

All good things must come to an end but this time around I expect it will be different than those horrific crashes of the last few cycles.

Barring the unpredictable catastrophic event that models generally do not predict, this time around the hotel space should endure a correction relatively unscathed.

There are always those projects that regardless of time or place will fail. Many urban CBDs will undoubtedly have the quintessential “hole in the ground” that was once a budding project (think Potala Tower in Belltown). However, this time there are certain economic and development governors that will slow our descent to a controlled level.

Underwriting criteria and unprecedented lending regulations (Dodd-Frank Title XIV) have helped control the euphoria of new development. Interest rate risk is finally coming back into play, albeit slower than expected.

Competition with other commercial real estate for land continues to hedge new hotel development, but intelligent developers understand the economic conditions and ever-changing development environment. And yet the greatest risk — consumer confidence — seems to be the most difficult to predict given all the recent economic and cultural gyrations throughout the U.S. and the world.

With that said, the Northwest is in an unprecedented expansion of corporate growth and development. Global players such as Amazon, Intel, Costco and Nike continue to expand and push the boundaries of growth, creating extraordinary numbers of commercial real estate development. At last look, Seattle had over 30 construction cranes building over 10,000 apartments, Class A offices and hotels.

Both Seattle and Portland CBDs have an unparalleled number of hotel developments in the pipeline representing a 32 percent and 27 percent, respectively, increase in upper-upscale hotel supply.

The good news is most of this is occurring over a period of four to five years and most, if not all, is being developed by seasoned hotel developers.

Prep for a downturn

Resilient hotel developers understand the cyclical nature of our industry and can weather the impending downturn that generally comes about every five to seven years. Recognizing we are going into the seventh year of this current cycle, it is imperative for hoteliers to prepare for a downturn, as the long-range averages predict we are now overdue.

As of late, economic conditions nationally have had an impact on our industry with REITs and C-Corps feeling the brunt of the volatility of the capital markets. Continued declines in oil prices and the weakening Chinese investment juggernaut have created havoc among institutional investors, corporations and middle-America that can be used as control mechanisms on our sometimes over exuberant developers.

But these “adjustments” are good as hotel operating fundamentals continue to remain strong and the average consumer — not experiencing many of these negative corporate pressures and enjoying low fuel prices — continues to travel and spend discretionary dollars.

Competition and controlled chaos can be good for the average consumer and although short-term pain will occur for hotel investors, owners and operators, the long-term prospects for hotels and hotel development remain bullish.

Chris Burdett is senior vice president at CBRE Hotels and part of the company’s broader global debt and equity finance division. He has been a hotel broker, owner and investor for more than 20 years in the Northwest.