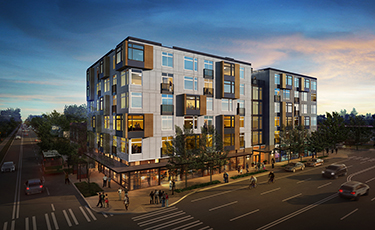 Image by Studio 216 [enlarge]
The Central, a 92-unit mixed-use building, is one of several projects Lake Union Partners is developing in Seattle’s Central District.


Principal Patrick Foley responded to questions about his firm’s activities in Seattle and Portland.

Q: As the economy cools, are there enough newcomers to keep the multifamily market at a boil here?

A: Yes, the evidence of positive in-migration is still pretty strong. It won’t continue at the current pace forever but that’s OK. We are experiencing stronger than we expected leasing velocity at our Rooster project at 65th and Roosevelt, where approximately 40 percent of our tenants recently migrated to Seattle.

Q: Whose design-review and permitting process do you prefer, Portland’s or Seattle’s?

A: I’m not sure we have a preference. I think Portland and Seattle are equally rigorous and challenging but they have their differences.

In both cities, design review is very subjective, and we’ve noticed that city planners have been taking more of an active role in wanting to influence or shape the design of projects. Some developers and their design teams are OK with that, and others don’t really appreciate it.

Q: You’re working on several big projects near 23rd and Union. What’s your role in the evolution of this long-troubled corner?

A: We see it as a huge responsibility to play a role in improving the perception of that intersection. It’s really important to not be arrogant, listen to the neighborhood’s concerns, and do your best to build quality projects that are timeless and authentic in design (whether contemporary or traditional), with good local, eclectic retail.

Most of the concerns voiced are centered around providing local retail services in the buildings that the neighborhood wants and needs, offering affordable housing, along with a unit mix that includes some larger units to accommodate more families. It’s difficult to capture everything but we do our best.

Q: You have office and hotel projects underway. Is this an effort to diversify from residential?

A: Yes, we are diversifying for numerous reasons. We will always have mixed-use, urban multifamily projects as our core business because people always need a place to live, and the urban cores of our cities will continue to grow given the diverse economy and overall desirability of Seattle and Portland.

We like office and hotel as an asset class, but outside of our creative office project The Standard at First and Spring, and (820) Roy Street, a large mid-rise office project where we are partnering with Talon Private Capital, we don’t have any other office projects in the works.

We are really excited about preserving the Eitel building at Second and Pike Street as an independent hotel. We are competent at preservation/reuse development but hotel operations and marketing are not our strength, so fortunately we have an excellent partner in Columbia Hospitality. We want to grow the hotel development side of our business and will continue to look for other opportunities in Seattle, Portland and other cities.

Q: Do any up-and-coming neighborhoods remain in Seattle?

A: Sure, there are other neighborhoods we like and are looking at with a contrarian perspective, but I won’t say where we are focusing.

We were early in the Central District and a lot of people doubted the wisdom of taking risk there, but now it seems obvious given the growth of commercial retail businesses along East Union Street, such as Chuck’s Hop Shop, The Neighbor Lady and Uncle Ike’s.

Our Addy project in Northwest Portland was less risky given the location between the Pearl District and Northwest 23rd Street, but our Cook Street project in North Williams (east Portland) on the bakery block was once viewed as a neighborhood with many challenges to overcome, but today it is a thriving destination neighborhood with good independent local restaurants, bars, grocery markets and clothing boutiques.