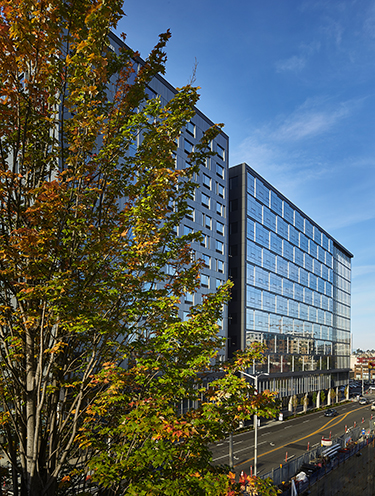 
Touchstone had a good year in 2015. Shortly after being acquired by Urban Renaissance Group, it landed leases with Amazon.com and Tableau Software, two of the most sought-after tenants in the region.

Touchstone President A-P Hurd, who wrote “The Carbon Efficient City” and is also a faculty member and Runstad Fellow in the College of Built Environments at the University of Washington, discussed her firm’s projects and development trends.

Q: Which sustainable trends do you appreciate and which do you disagree with?

A: Putting housing and workplaces near transit is the number one thing we can do in Seattle, from an economic and environmental perspective. Our roads are pretty much maxed out at peak demand times, so it’s critical to make sure that people have transit as a mobility alternative. That means putting new buildings in areas well-served by transit.

In addition, more than 60 percent of carbon pollution in the Puget Sound area comes from vehicular trips. While it’s good to have energy efficient buildings, the opportunity for greatest impact is matching up our land use plans and our transit system.

Lastly, having more of our built environment within range of fast and reliable transit makes the region more affordable for everyone. Since car ownership is estimated to cost north of $6,000 per year (factoring in gas, parking and insurance), having a great mobility system is a huge, though often overlooked, part of keeping our region affordable.

Obviously, our transit system needs to provide a time-competitive commute, which is why I’m so excited about our Bus Rapid Transit investments with dedicated lanes and the light rail expansions taking place this spring and over the coming years.

Q: Which real estate sectors are you most excited about?

A: Right now, I’m pretty bullish on all real estate “food groups” across Seattle. I realize there are market cycles, so I’m not totally Pollyannaish about it, but I do think that even if we see some national economic contraction in the coming years, Seattle will remain a relatively better place to be. This should lead to continuing in-migration and demand for housing.

On the business side, many of our companies are growing not primarily due to national GDP growth, but rather by gaining significant market share or creating disruptions within their markets. Again, that should make our employment growth relatively resilient, even if the national economy as a whole takes a stumble.

Q: What are the biggest challenges facing Seattle real estate?

A: Probably the biggest challenge we face right now is that growth in recent years has led to a lot of change, and that’s hard to digest. In addition, a lot of the solutions to that change are not obvious.

For instance, many of my neighbors in Ballard are convinced that new development is causing housing prices to go up, because they see cranes at the same time as rents are rising. The two are correlated, but the cause is backwards — people are developing more units in Ballard because rents are rising, not the other way around.

Also, many of my neighbors feel like if newcomers would just move to another part of the region (and not to Seattle), it would improve the traffic situation for them. But for anyone using arterials, turning people away from urban development actually makes the traffic worse: if someone moves to Ballard, they have a 50-50 chance of needing a car, but if they move to Auburn and work in the city then they have a 100 percent chance of driving a car and clogging up our roads.

Again, it’s not intuitive; a lot of people are tired of growth and want it to go “away,” only problem is that putting it out of sight could make our infrastructure problems even worse.

Q: How does Fremont reconcile its status as the quirky “Center of the Universe” with its rapid job growth?

A: To put it in context, that micro-market has about 1.5 million square feet of office, and recent projects are adding about another 500,000 square of office. So, it’s a big jump over a five-year period, but it shouldn’t be overstated.

I think it’s really good for the neighborhood’s small businesses, as one of the challenges in residential communities is keeping small businesses thriving and having lots of people walking around and shopping at different times of day. Increasing employment — and daytime population — in Fremont helps with that. It also seems like many of the companies that locate in Fremont self-select for that environment. Their employees value those neighborhood amenities and patronize them.

While it’s hard to build new office markets without some critical mass, I actually think it would be good to see more of this in some of our other urban villages, provided that the urban villages can be accessible enough that not everyone has to get there by car. We have a long way to go on inter-neighborhood transit.

Q: What kinds of opportunities and challenges do projects with a hotel and offices, or with offices and residential units, create?

A: The things that made us look hard at mixed-use projects are the opportunities for shared parking for uses that have complementary demand profiles (e.g. hotels need parking evenings and weekends, while offices need parking weekdays daytime), and the way the Seattle zoning works — commercial uses consume FAR (floor area ratio) and residential uses don’t. These kinds of things are pretty powerful economic levers.

What’s funny is that even though many architects love the story about “mixing uses,” it can be pretty complicated in practice. For one thing, institutional capital is often only available for single uses, so when we’ve created mixed-use projects, we have to tee up all the capital at the same time, and create risk management structures that make all the parties feel OK about inhabiting the same space or structure.

Also, there are a lot of traditions in real estate about how different uses don’t share space. Some of these may get easier to manage with time, but for now breaking the rules creates a lot of risk. For example, office and residential, or office and hotel uses, historically don’t share lobbies or elevator banks.

When you get right down to it, there’s not a real reason that this can’t happen, but no one wants to be the first one to break the rules on a big project. It’s like wearing a tie that’s six inches shorter than standard; since ties don’t really serve a function any more, it probably wouldn’t make a difference, but would you want to bet $100 million on it? Probably not.