Sports fans using Link light rail, Amtrak or Sounder commuter rail service to visit CenturyLink and Safeco fields are reminded of the Stadium District’s legacy as a rail yard. Likewise, visitors to Seattle’s one-of-a-kind Gas Works Park are reminded of its history, as the park retained features of the former coal gas plant.

Most, however, are unaware that without community vision and support many decades ago these iconic Seattle landmarks may have become brownfields.

Brownfields are vacant or underutilized properties for which reuse or redevelopment is hindered by actual or suspected contamination. While their characteristics vary, brownfields share many common redevelopment challenges. Left ignored and abandoned, sometimes for decades, brownfields put the health, safety and economic vitality of our communities at risk.

According to the Environmental Protection Agency, there are as many as 500,000 brownfield sites throughout the U.S., including dozens lurking in nearly every community in Washington.

Brownfields vary greatly in size and character, ranging from ¼-acre vacant lots once occupied by gas stations and dry cleaners to multi-acre former industrial facilities, such as mills and manufacturing plants. Many are along waterfront areas and historic railroad corridors. Others are found in suburban settings, such as aging strip malls. 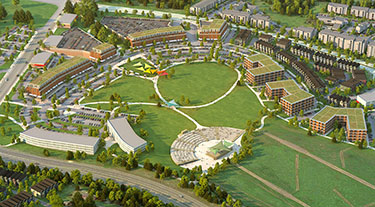 Why reinvest in brownfields?

Many brownfields have potential for reuse that could spur the revitalization of struggling areas but remain idle due to fear of hidden environmental liabilities. Historic industrial and commercial operations, as well as dated buildings that may contain asbestos or lead-based paint, present valid concerns regarding the potential presence of contamination.

If concerns are great enough, property owners may favor leaving their property as-is or abandoning it altogether out of fear that the financial gain from selling or redeveloping may be less than the cleanup costs. Furthermore, although many brownfields occupy prime real estate (e.g. city centers, waterfront and corner lots along major transportation corridors), the stigma attached to them causes private investors to look for seemingly less risky opportunities — which all too often are “greenfield” sites on undeveloped lands.

Reinvesting in brownfields provide many community benefits, including attracting new business opportunities that create jobs and generate increased taxes that can fund infrastructure improvements, as well as neighborhood programs or park developments.

Other benefits of brownfield or “urban infill” development include reducing blight and crime in neighborhoods and protecting sensitive environments, such as farmland and natural areas, by reducing threats to the environment and urban sprawl.

Years of systemic disinvestment in brownfield-impacted areas, however, leave many communities without the necessary resources to address these issues. As a result, valuable brownfield properties that could serve as catalysts for revitalization often remain vacant until funding is available to complete assessment and cleanup activities.

The devastating long-term effects of brownfields prompted the EPA to establish its national Brownfields Program in 1995 that provides funding and other forms of assistance to communities that are overburdened with brownfields.

Since the program’s inception, the EPA has leveraged more than $24 billion in public-private partnerships to empower communities in their efforts to restore environmental and economic vitality through brownfield revitalization.

The assessment grants establish an inventory of brownfield sites throughout the community. With an inventory in hand, communities work with property owners, developers and consultants to assess environmental conditions and plan for cleanup and redevelopment of publicly and privately owned priority sites. These grants also allow a portion of the funds to be used for “area-wide” or site-specific cleanup and redevelopment planning activities.

When faced with brownfield issues, the city of Kent knew exactly where to begin the revitalization process. In 2012, the city secured $400,000 of EPA assessment grants. A city-wide brownfield inventory identified hundreds of potential sites, so the city established criteria to rank sites based on factors that included reuse potential, stakeholder interest, and protection of human health and the environment.

The 12-acre former aluminum smelter site (in the “red hot” Kent Valley industrial market) was prioritized due to its desirable location (including railroad access) and redevelopment interest. The site has been idle for nearly 30 years due to debris piles left following the smelter’s closure in 1986. Cleanup costs are estimated to be in the millions of dollars, and over $1 million in back taxes are owed.

The city is using grants for a public-private partnership approach to redevelopment. Restoring the site for industrial use will provide shovel-ready space that will attract new employers to the area and create jobs for local residents.

The Kent Highlands Focus Area was prioritized due to its prominent location along the city’s highly visible western gateway (adjacent to an I-5 interchange) and the significant opportunities associated with over 170 acres of underutilized land. Centered on the former 114-acre Kent Highlands Landfill (which received municipal waste from Seattle until its closure in 1986), the area remains largely undeveloped due to regulatory, environmental and engineering constraints.

EPA funded a community visioning exercise led by Kent and Stantec to engage local stakeholders in creating a compelling yet practical vision for future use of the landfill, as well as a detailed strategy and “road map” to transform the vision into reality. With additional community support and public-private partnerships, the landfill area is poised to become a regional destination.

Many other communities throughout Washington are taking advantage of state and federal funding to support revitalization of publicly and privately owned brownfields, such as King County (http://your.kingcounty.gov/solidwaste/brownfields) and the city of Everett (https://everettwa.gov/675/Brownfields-Assessment-Grant).

If you own or are interested in redeveloping a brownfield property in Washington, there may be local, state or federal funding available to support your project.