Office market shows no signs of slowing down

Seattle’s population growth is far outpacing the national average, and due to the strong job market and high quality of living, it continues to attract millennials at a faster rate than nearly every other major U.S. city.

In 2015 the economy continued to strengthen, with unemployment in the summer dropping to the lowest figure the region had seen since mid-2007. Local job growth looks to remain strong, with the most recent employment forecast from the Puget Sound Economic Forecaster calling for impressive growth of 2.3 percent in 2016.

The Milken Institute recently released its 2015 Best-Performing Cities report, which listed Seattle’s greatest assets as its well-educated and highly skilled workforce, as well as the fact that high wages in tech industries support consumption-related jobs throughout the rest of the local economy.

Due to those and several other factors, Seattle was ranked as the seventh best-performing large city in the U.S., an improvement of four spots from last year’s report.

As in previous years, the robust demand we’re seeing is driven primarily by the high-tech industry, which accounted for approximately 47 percent of all regional office leasing activity in 2015.

No longer are tech companies looking exclusively for space in stereotypical “creative” submarkets such as Lake Union and Fremont. We have seen numerous tech tenants move into traditional high-rise buildings, including Groupon at 1201 Third, Uber at Second and Seneca, and PitchBook at 901 Fifth.

With owners spending significant capital improving their buildings, it is no surprise that the trend of tech companies migrating to the CBD has intensified. These companies are finding not only the quality of space they desire, but also a level of amenities that only downtown can offer.

Total vacancy in the Seattle metro area declined for the sixth consecutive year, dropping 50 basis points year-over-year to 10.2 percent, which is as low as the market has seen in the last 10 years. At 4.5 percentage points below the national average, the Seattle market is the sixth tightest office market in the country; behind Salt Lake City, Nashville, San Francisco, Portland and New York. Subsequently, average asking rents are up 7.5 percent year-over-year, and have hit a 10-year peak.

Leasing market fundamentals will continue to improve with strong rent growth anticipated in the short and mid-term.

Seven major office projects were delivered last year totaling more than 2.2 million square feet. This makes 2015 the most active year for development since prior to the recession.

With more than 5.9 million square feet under construction, Seattle is the second most active market in the U.S. for development as a percentage of existing inventory, behind only Nashville. While this is a substantial amount of construction, concern locally about overbuilding remains fairly low, since demand is as high as it’s been in recent memory.

We’re tracking more than 8.2 million square feet of tenant demand in the market. Fourteen companies are seeking space options of 100,000 square feet or larger, and there are just 10 existing blocks of space that can accommodate them. So, the supply coming to market in the next 24 months is needed. 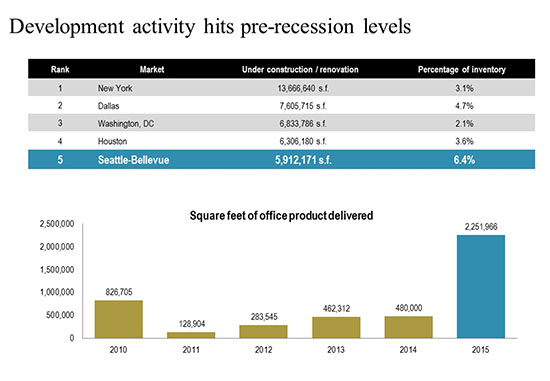 In PWC and ULI’s Emerging Trends in Real Estate 2016 report, Seattle was ranked as the strongest West Coast real estate market and fourth strongest overall in the U.S., up four spots from last year’s eighth place ranking. Additionally, Seattle was named the third best market in terms of investment potential and has surpassed San Francisco for the first time since 2010 to top the West Coast region.

In total, the market saw 48 transactions over $10 million close, which makes 2015 the most active year for office investment sales since 2007. The $4.5 billion total volume represents a 157.8 percent increase over 2014. For the sixth consecutive year a new market-record for pricing was achieved, when 2201 Westlake traded for $792 per square foot.

Four sales closed in 2015 where pricing exceeded $700 per square foot, and with how pricing has grown in the last five years, it is not unrealistic to imagine a $900 per square foot office sale occurring in Seattle in the near future.

Perhaps the most notable sale of the year occurred in August, when Gaw Capital Partners acquired the 76-story Columbia Center for $711 million. This was the largest real estate transaction in the region since Amazon purchased its headquarters in 2012, and provided clear evidence of foreign investors’ interest in Seattle. 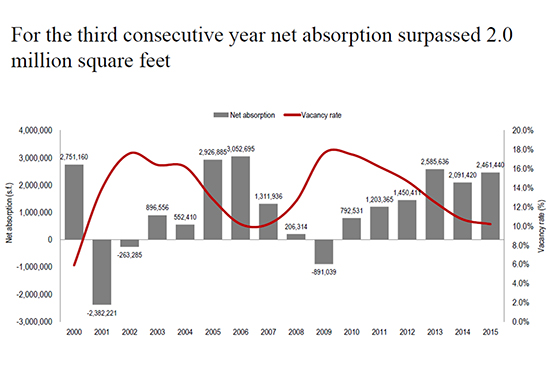 The two largest office sales in the region this year — Columbia Center and Amazon Phase VI — were purchased by foreign investors, so it should come as no surprise that Seattle moved from eighth to fifth in terms of best U.S. cities for real estate investment in this year’s Foreign Investment Survey by the Association of Foreign Investors in Real Estate.

Foreign investors had increasingly been on bid lists for major assets in recent years, so 2015 was the natural progression of that trend, as efforts to enter the market became increasingly successful.

As the market moves into 2016, strong landlord sentiment and expectations for robust demand will continue to fuel investor appetite for Seattle’s office assets. While it may be hard to match 2015’s volume, we anticipate total office sales volume will exceed $3 billion and the market record for pricing per square foot will fall for the seventh consecutive year.

What’s next for Seattle?

Lake Union, Pioneer Square and the Seattle CBD are undeniably hot markets, but what’s the next big thing in local real estate?

The other reasons these areas should heat up is because they have the young talent that employers seek, and all either have or will soon have great mass transit. 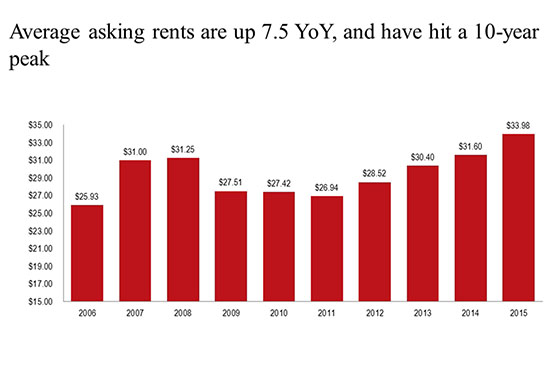