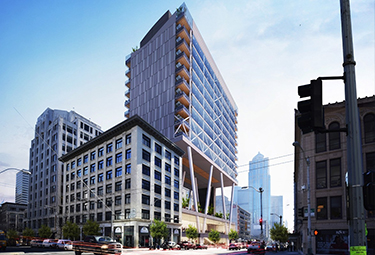 Rendering courtesy of CollinsWoerman/Urban Visions [enlarge]
Urban Visions is planning The Launch Pad office building at 1516 Second Ave. in Seattle. Construction will start in about a year.


Greg Smith, president and CEO of Urban Visions, answered questions from the DJC about his firm and the industry.

Q: What are your plans for the Aaron Brothers building?

A: The building at 1513 Third Ave. in Seattle was constructed in 1920 as the Winter Garden Theatre, and we intend to bring back its grandeur after the Aaron Brothers Art & Framing business leaves there in May.

Our plans are to renovate the exterior facade and hopefully replicate the marquee that was once there. The interior is 35 feet tall, and we will demolish the drop ceiling to expose the amazing volume and character of the building.

We want to create a bar/performance venue that reflects and supports Seattle’s creativity and talent. This is a work in progress, but the bones are there. We think we can make this a destination for urban residents and tourists alike.

Stay tuned as this historic icon is brought back to life.

Q: Any ideas of how to make Third Avenue more appealing?

A: It’s happening now! Historically the area between Pike and Virginia and Second and Third avenues has been an underdeveloped zone containing parking lots and run-down or vacant buildings. Today, four city blocks starting from Second/Third and Pike and running north up to Second/Third and Virginia are experiencing major redevelopment.

These new developments will have 1,300 housing units in six towers, five hotels containing 500-plus rooms and meeting spaces, and three new office projects. All the projects will have exciting street level retail opportunities. This equates to 4,000-plus new residents, office workers and tourists living, visiting and shopping in the neighborhood.

The developments, along with efforts by the Downtown Seattle Association, the city of Seattle and King County, are changing this once-dilapidated area to a successful link of the Pike Pine Corridor and a new, vibrant and exciting bridge between the Pike Place Market and the retail core. Those efforts include reprogramming Westlake Park, the Third Avenue streetscape, new bus stops and increased police patrols.

Q: What are the biggest trends in your industry locally?

A: Developers, brokers and tenants have historically thought about buildings on a rent per square foot basis, but many businesses today use a more sophisticated approach.

Businesses which locate in progressive, iconic and space-efficient buildings, can quickly attract better employees, who will be healthier, happier, more creative and collaborative — and stay longer.

That lowers their employee cost per square foot. We believe they can save at least 1 percent or $13.50 per square foot per employee a year — and likely much more — by picking the right building.

Rent is a small fraction of total employee cost, maybe 4 percent. So while the rent per square foot may be higher to get the right building, doing so can mean overall savings.

A: The workplace culture has dramatically changed over the last 10 years. Before the Cloud, traditional high-rises with large artificially illuminated floor plates that housed expansive back-of-house functions, such as storage, files and libraries, were most in demand. Large offices for people in suits and ties lined the perimeter, walling off natural light to most of the workforce.

The Cloud now stores most back-of-house functions. Gone are perimeter offices and drop ceilings. Natural light is a must, suits and ties are passe and open collaborative work environments are the norm.

Tenants want healthy buildings that have a coolness factor so they can do creative, collaborative, productive work.

Q: Where will real estate growth come from locally in the next few years?

A: Seattle never ceases to amaze me. It generates disruptive thinkers in music, science, healthcare, sports, businesses, tech, manufacturing — in everything. Perhaps it’s something in our water. No wonder young and old want to move here.

Some 67 percent of the city is zoned for single-family neighborhoods. So I expect major real estate development to continue to be focused where it belongs: in the urban core, from Safeco Field to the University District/Fremont, the Waterfront to Capitol Hill.

Those employers and employees want nearby housing, and easy access to public transit and highways — and will so even more as congestion grows.

In recent years, most of the city’s growth has been focused on the amazingly successful South Lake Union neighborhood. But businesses are now considering other submarkets that were once overlooked as traffic becomes more of an issue.