3 projects are putting a new face on the Denny Triangle

By way of dynamite, hydraulic cannons and steam-powered excavators, the leveling of Seattle’s Denny Hill was among the city’s most transformative undertakings. A 1910 photograph familiar to many offers an enduring image: its remaining structures perched atop so-called “spite mounds.”

Backers of the Denny Regrade saw the hill as an impediment to growth north of downtown. With the excavation of 65 blocks and millions of cubic yards of soil came the flat Belltown street grid we see today, improving access to nearby neighborhoods.

Yet any hope for a flourishing downtown extension in the Denny Triangle would have to wait. The economic woes of the 1930s derailed the momentum, and the threading of Interstate 5 through Seattle in the 1960s severed it from Capitol Hill.

Today, the Denny Triangle of old — once defined by its surface parking lots and low-rise buildings — is undergoing a dramatic revitalization, with the city’s tech sector setting the pace. 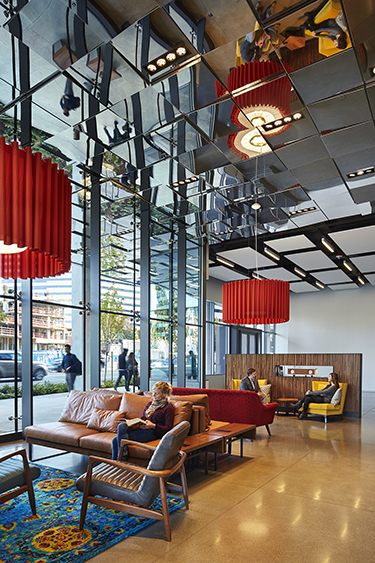 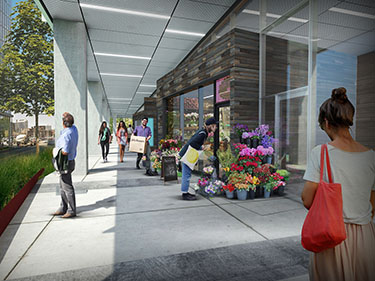 Image from ZGF Architects [enlarge]
Tilt49 was designed with pop-up spaces that could host temporary stores, such as a flower shop for Valentine’s Day.

On the seventh floor of one of Denny Triangle’s newest developments, the 11-story Hill7, office workers sit at the same elevation as Denny Hill’s former summit, 240 feet above sea level. The name Hill7 is a nod to that since-departed seventh hill of Seattle, as well as the visionaries who actually managed to move a mountain.

Developed by Touchstone and built by Mortenson Construction, Hill7 is among the bevy of high-profile office, residential, retail and hotel projects driving the neighborhood’s revival.

Rising opposite Hill7 on Boren Avenue is AMLI Residential and Mortenson Development’s 41-story apartment tower, AMLI Arc, and the 11-story Tilt49 office project developed by Touchstone and Principal Real Estate Investors. AMLI Residential is a multifamily real estate firm headquartered in Chicago and focuses on the development, construction and management of luxury apartment communities throughout the country. Mortenson Construction is building both projects on the same half-block where a tire shop once stood.

All three projects are redefining Denny Triangle’s streetscape, and distinguishing it from those of downtown and South Lake Union.

To that end, Hill7, Tilt49 and AMLI Arc have matching colonnades that line either side of Boren Avenue. Expanded sidewalks and transparent ground-floor facades activate the neighborhood at the pedestrian level. Another distinguishing feature at Tilt49 is the integration of pop-up spaces, intended to bring a rotating selection of local and seasonal programming to the area (e.g., hosting a flower shop in the lead up to Valentine’s Day).

Touchstone’s relationship with Cornish College of the Arts may also bring student artwork to the neighborhood.

Denny Triangle’s building boom poses unique coordination challenges for builders. With so much activity and so few staging areas, Mortenson leaned heavily on prefabricated elements for Hill7’s building envelope, and will do so again for Tilt49 and AMLI Arc.

Operating in close proximity can also be challenging.

During last year’s excavation work for Tilt49 and AMLI Arc, a mere 16 feet separated our 65-foot-deep excavation from that of a neighboring contractor’s site, out of which another apartment tower is rising. With only a narrow band standing between the two sites, close collaboration with the same shoring-system designer was needed.

Another consideration is the city’s developing street-use policy, dictating how and when streets, sidewalks and bike lanes can be closed for construction. Adding to the complexity for Tilt49 and AMLI Arc is that they border three main arterial streets, with Stewart and Howell serving as key corridors in and out of the city during peak commutes. Proactive communication with the city and neighboring businesses has never been more vital. 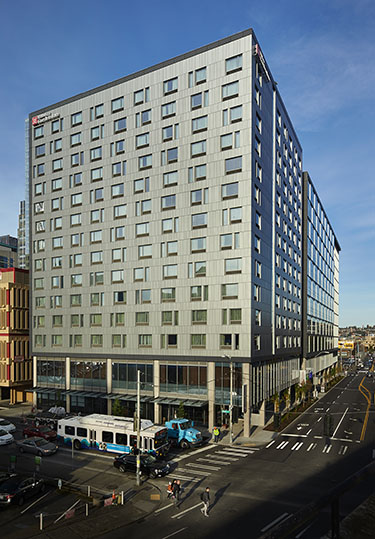 Photo by Ben Benschneider [enlarge]
Hill7 was named after the seventh hill of Seattle that was removed during the Denny Regrade. 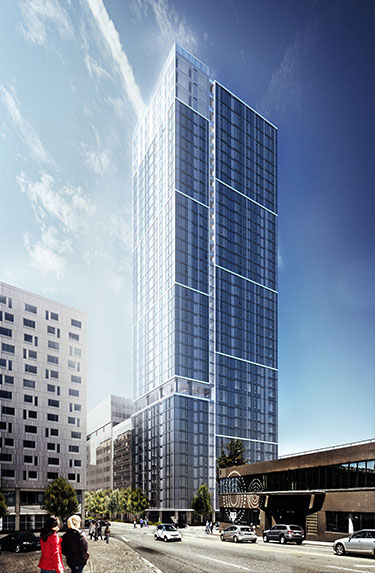 Image from ZGF Architects [enlarge]
At AMLI Arc, Mortenson expects to run out of temporary power when construction reaches the 20th floor. It will tap into permanent power to build the remaining 21 floors.

Mortenson Construction is anticipating another hurdle later this year: running out of access to temporary power due to the area’s overtaxed electric grid. The current supply of temporary power, used to run the tower crane and personnel hoists, can only support building half of AMLI Arc. By the time the 20th floor is complete, Mortenson will have installed transformers to tap into a permanent power source from Seattle City Light, enabling construction of the remaining 21 floors.

The Denny Substation is expected to come online in 2017 to add capacity to the neighborhood. In the interim, Seattle City Light is relocating utilities in the area.

A new take on urban living

Since 2010, Seattle has seen a population surge unlike any in the city’s history, with newcomers concentrating in South Lake Union and the Denny Triangle.

For these young, highly sought-after workers, deciding where to live boils down to public spaces, building amenities, and proximity to work, public transit, recreation, cultural events, dining and nightlife. AMLI Arc’s location, between the South Lake Union office hub and the nightlife of Capitol Hill, and adjacent to the central business district, will provide residents just what they are looking for.

When completed in 2017, AMLI Arc will have studio, one-, two- and three-bedroom apartments and penthouses with a range of finishes and amenities. The apartment tower will have a private party room with an outdoor dining area, chef’s kitchen for hosting larger parties, fitness center and yoga studio, media room, conference rooms, and a large rooftop deck with grilling areas and views of the Seattle skyline and Puget Sound. For residents who work remotely, co-working space is planned for the 41st floor. Even Fido has plenty to look forward to: self-cleaning turf, a pet salon and a pet play area.

One feature that Hill7 office workers and Hilton Garden Inn hotel guests are less likely to recognize is unique to the commercial building market in Seattle: a blue-roof system. During heavy downpours, rainwater will be temporarily stored in a rooftop retention vault; thereby helping to prevent the city’s combined sewers from being overwhelmed. The blue roof’s 1.5-inch-diameter openings — smaller than the standard 4-inch variety — slow the water’s release. In addition to its potential ecological benefits, the blue-roof system eliminates the need for water pumps and heavy equipment, cutting costs, long-term maintenance challenges and energy use.

The system also boosts the building’s architectural appeal, improving the view for an ever-growing number of high-rise neighbors claiming Denny Triangle as their home.