Growth was slow and it wasn’t until 1870 that Seattle’s population topped 1,100. Yet, Seattle’s historic predilection towards boom eras soon emerged.

The region’s first boom happened during the ensuing decade. From 1880 to 1890 Seattle’s population increased 12-fold, from 3,500 to 42,000. As the century turned, the population of Seattle nearly doubled to 80,000 residents. Flipping the history books forward 115 years — to present day — we’ve seen the region add nearly 70,000 jobs in one year alone, with overall population growth nearly leading the nation in each of the last three years.

Picks and gold pans are now artfully substituted for laptops and virtual reality goggles. New claims of land, in the form of office leases, are staked by the likes of Amazon, Oculus, Tableau, Apple, Oracle, Facebook, Uber and Pitchbook. A modern Gold Rush era is in our midst and present day Horace could easily decry “Go Northwest!”

Fundamentals of the current boom era span from the economic to the geographic and demographic. Seattle’s West Coast location, proximity to San Francisco/Silicon Valley and hyper-desirability to the millennial cohort conspire in creating a near perfect storm of demand fostered by capital eager for deployment.

Accordingly, over the course of the last five years the combination of these factors created and buoyed the strongest apartment market experienced in over two decades, principally fueled by:

• Pent-up demand from lack of development during the Great Recession

• Expansion of tech-sector employment and drafting off Silicon Valley fundamentals

The reality of these drivers is no more manifest than in the region’s apartment development pipeline.

A pipeline to envy 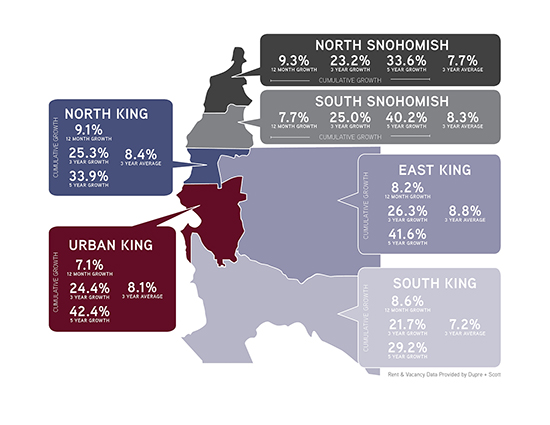 [enlarge]
Annual rental rate growth across King County has averaged about 8 percent over the past three years.

Eighty thousand units! Yes, 80,000 apartment units are in some form of development or proposal in King County. If completed, this figure represents a near 50 percent increase in the current apartment stock in King County.

During the current expansion cycle, spanning 2011 to 2015, apartment developers delivered approximately 32,500 apartment units — roughly 6,500 units each year. Apartment developments underway and slated for delivery between 2015 and 2019 total another 48,000 units — equating to nearly 10,000 units each year for five continuous years. More are planned, yet without defined delivery dates.

Although the lion’s share of apartments thus far delivered are concentrated in the region’s urban centers and core neighborhoods, apartment developers continue to seek developments in emerging hubs outside Seattle and Bellevue. Namely Lynnwood, Bothell, Redmond, Issaquah and Burien.

One may marvel at the amount of development occurring in the region, yet there is more to this story. The economic soundness of the current expansion or “boom” cycle beget further investment on behalf of market participants, contributing to an apartment development pipeline yet to slow. However, despite record number of new apartment deliveries, rental rates continue to rise while vacancy rates remain stable and in many cases well below 5 percent — a historic measure of a balanced market.

Apartment developers built them and the residents came!

Early in the current economic cycle apartment rental rates grew spectacularly in core, urban markets — exceeding most other markets in the nation and landing Seattle in Top 10 rankings on list after list. As the cycle matured in 2013 and 2014, and new deliveries met demand, continually rising rental rates spurred developers and investors into action.

Looking back at three- and five-year trends, across the region rental rate growth continuously averages between 6 percent and 8 percent — an extremely strong cumulative trend. Rental rate appreciation during a time of expansive inventory growth speaks volumes to the region’s economic fundamentals. Overlay sub-4 percent vacancy rates and one can easily understand investors’ desire to put investment dollars to work in Puget Sound. 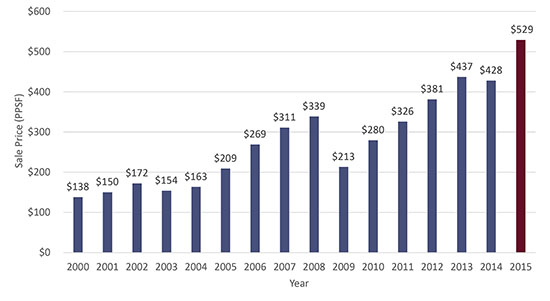 Apartment sales volume is a great bellwether of investor confidence in the region. In 2015 new sales volume records were set. Serving as the most prominent example of investor demand, regionally investors spent over $4.7 billion on apartments in 2015 — surging 42 percent over sales volume in 2014, which itself stood as a near 10-year record for the region.

The measure in the market truly punctuating investors’ thirst to own apartment assets in Seattle is the meteoric rise in the price-point of apartment buildings. Using price-per-square-foot as a measure, average sales price in urban markets grew to $529 per square foot in 2015, 23.6 percent higher than 2014 and 2.5 times the average sale price during the market bottom in 2009.

Continuously escalating price-points is truly a measure of both investor demand and quality of assets trading hands. It is inescapable that new-vintage, well-appointed apartments will sell for high prices. However, what has come as a surprise to many investors is pricing for buildings 60-plus years old trading at small discounts to new buildings.

For years I have called Seattle a dollar-cost-average market and I see few signs that high pricing will abate. Although most pundits agree that the market peak is nigh, don’t expect any period of market softening to reflect appreciable discounts.

Looking ahead, the same fundamentals paving the way to current robustness in the apartment market remain. Job growth remains pacesetting for the nation. Young, talented workers continue to relocate to the Seattle region and well-capitalized companies snatch them up to the point of a labor shortage (a quick search reveals Amazon has over 6,400 job openings in Seattle alone).

Rest assured, a threat of headwinds exists. The supply pipeline is mounting. Capital markets are showing signs of caution. And we all know that trees don’t grow to the sky. With the looming reality of the cyclical nature of commercial real estate, professionals in the apartment investment space remain cautious, yet optimistic for clear seas despite predictions of mild choppiness ahead.

Dylan Simon is vice president of investment sales with Colliers International in Seattle. He focuses on the sale of apartment buildings and development land in Seattle and the Puget Sound region.