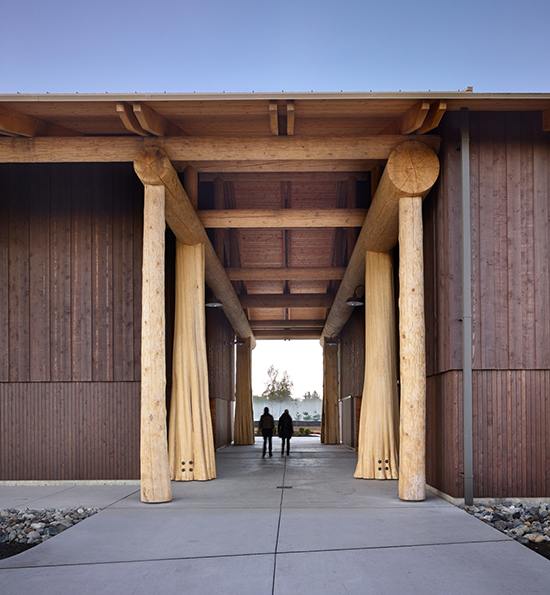 Photo courtesy of Donovan Brothers
Peeled log construction was used for the smokehouse.

This project, the first longhouse built on the Muckleshoot prairie in more than 100 years, is dedicated to the practice of the Smokehouse faith, a traditional spiritualism also known as Seowyn.

The Muckleshoot Indian Tribe committee worked on this project for more than a decade as it is a critical step in the revival of the tribe’s traditions.

The peeled log construction and long, gabled roof are true to the traditional longhouse structures of the Southern Salish peoples. Cedar, considered a gift to their ancestors because of the innumerable uses they found for it, is used for columns that stand sentinel in the ceremony rooms and planks that span between the columns sheltering the occupants. Douglas fir was harvested for the logs, rafters and decking of the roof structure.

The main ceremony space, at the west end of the building, seats 500, while the smaller “local room” at the east houses more intimate services. Dirt floors keep the dancers and congregants connected to the earth, and fires in the large wood stoves keep out the cold. The dining hall has a fully appointed kitchen and outdoor cooking area, and can serve 250 guests.

After being awarded the project contract, Donovan was informed that it was 25 percent over budget. That required months of meetings and design changes to ensure that the integrity of the project was maintained while meeting the budget. There were many other challenges to the project, but none ultimately impacted the schedule or functionality of the finished structure.

Neither water nor power was available to the building, so special generators, equipment and connections were used to power up the building in zones to test and inspect each system and component prior to completion. Water had to be brought in to flush and test both the fire lines and the water lines within the building.

It is a tradition for Smokehouse members to do ornate carving in the vertical logs, so all had to be sized to provide structural support while accommodating a certain depth of carving.

On-site materials such as soils, trees, rocks and native plants are part of long-standing tribal culture. No materials were allowed to leave or be brought on-site without consent of the tribe. Trees and architectural rocks were harvested from tribal lands and river beds for use in the site development and landscaping. Soils in the ceremony rooms had to be specially mixed to be compactible, dust free and soft enough to walk barefoot on.

The project required that the roof have a 50-year warranty, so each penetration was detailed and approved by the manufacturer before starting work and inspected through the duration of the project.

Donovan completed the project on time and on budget with no accidents in 15,642 hours worked.