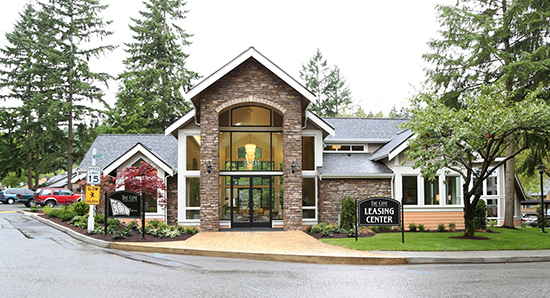 Photo courtesy of Synergy Construction
There was no lay-down or storage room outside the tight construction site at The Cove.

Hooking up sewer and drainage were significant challenges, as the existing storm pipe was not in the location shown. Likewise, the existing sewer pipe for outfall was not correctly sited. Working with the civil engineer who developed an alternative design, Synergy was able to use his plan and a camera in the pipes to find suitable connections.

All construction was done while the apartments were occupied. There was no room outside the construction area for lay-down or storage, and utility vaults had to be moved with no interruption in service. When the project was nearly complete, the owner wanted the pool and spa upgraded to current codes requiring new drains, a new pump and heating units. Synergy then demolished and replaced the pool deck.

With a tight landscaping budget, the Synergy team reconfigured the irrigation system, built a subterranean stormwater infiltration system to cover the added building and other impervious surfaces, and installed a small rain garden.

Management and tenants were well informed and adhered to safety requests, allowing the project to be completed with no accidents in 1,462 hours of work.