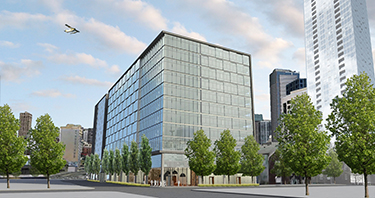 Image courtesy of Touchstone [enlarge]
Mortenson is building Hill7, a hotel and office building in Seattle.

Mortenson executives John Nowoj and Michael Harder responded to questions from the DJC about the company’s activities and industry trends.

Q: What’s the most interesting project you’re working on?

A: The Elliott Bay seawall project, in which we are joint ventured with Manson Construction as GC/CM. The Elliott Bay seawall project is one of a kind and embodies all the complexities of an urban project, and has a marine environment with endangered species protection, and complicated design and construction. That being said, it has been and will continue to be a fun challenge for our team to tackle!

Q: Which economic trends are you keeping an eye on?

A: Our biggest concern as the market heats up will be keeping an eye on inflation. A large portion of our workload is design-build and other alternative delivery where projects have an extended pre-construction period, and the construction phase is two or three years out in the future. We expect to see labor escalation to some extent, but believe that material escalation will be the greatest concern.

Q: Which market sectors do you see picking up or losing steam?

A: We continue to see strong growth and opportunities in the environmental market due to regulatory changes, aging infrastructure and population growth. Additionally, pressure on the state budget is impacting project delivery and will force more creative delivery opportunities and financing solutions.

Q: How early in the design process does Mortenson become involved?

A: In the past 10 years, Mortenson has migrated our business to exclusively negotiated and best-value selection processes, which has resulted in our participation at the beginning of the design process.

Q: How has BIM and lean construction affected owner preferences?

A: As owners start choosing alternative delivery methods and experience the value that a contractor can bring during the design process, which includes BIM and lean methods and techniques, we feel this value further emphasizes the benefit early contractor selection can offer to an owner.

Q: Has Mortenson been hiring? What’s your biggest staffing challenge?

A: Even through the Great Recession, we were focused on continuing to hire the best talent, and that strategy and focus has not changed as the market has picked up. We do expect to increase our team depth over the next year in order to continue to deliver on increasing customer demand. The biggest challenge we are facing in recruiting is finding experienced team members for the increasingly complex projects that we pursue and are selected for.