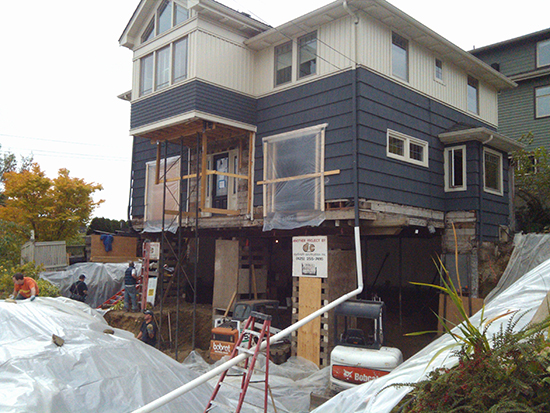 As part of an extensive remodel of the McBryan residence on Seattle’s Queen Anne Hill, Dochnahl Construction was hired for the excavation and shoring of the house, as well as all structural and architectural concrete work.

Excavating in a dense neighborhood only a few feet from the property line at the beginning of the rainy season was just one of the challenges faced on the project. Adding a two-car garage without raising the house, installing new foundations and architectural concrete, meeting setback codes, and installing the landscaping concrete in constantly changing terrain were among the others.

The west foundation wall was only 5 feet from the property line, so excavating to a depth of 10 feet without crossing the neighbor’s yard called for using several 2-inch pin piles and steel brackets to shore the existing foundation. Dochnahl then formed and poured a “shelved-in” foundation to achieve the needed height.

Creating space for the new garage without lifting the house and keeping the driveway at a relatively flat plane required excavating 16 feet below the main floor framing to reach the footing subgrade. To maintain a small bump-out on the top floor of the front side of the house, Dochnahl used 2-inch pipe piles with cross-bracing welded to the face and tiebacks leading back to the framing.

Crews used special erosion control measures to prevent dirt from washing into the street. A total of 525 cubic yards of dirt was excavated and removed from the site.

To maintain the legal setback, the western portion of the new garage had a concrete lid — turning it into a partial bunker — because the underground portion of a structure can cross setback lines but above ground portions cannot.

Dochnahl completed the job within one week of the estimated finish date, was $20,300 under budget and had no injuries in 1,325 hours worked.