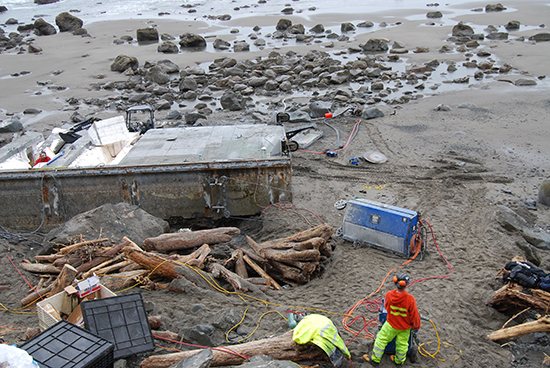 Photo courtesy of NCM Contracting Group
A rope saw was used to cut up the dock.

Following the 2011 earthquake and subsequent tsunami in Japan, a section of dock was grounded on the Washington coast about a quarter-mile south of where Mosquito Creek meets the Pacific Ocean in the Olympic Coast National Marine Sanctuary.

The dock had to be removed to comply with the resource protection goals in place on federally regulated lands and water.

The 185-ton dock was 65 feet long, 20 feet wide and 7.5 feet tall. Many people were concerned about the 200 cubic yards of Styrofoam-type material that made up most of the dock’s volume being released into the ocean and onto the beach, where it could be ingested by fish, birds and marine mammals.

NCM Contracting Group used helicopters to get to the remote site where the dock was lodged. Three different types of helicopters were used for crews, equipment and concrete removal.

NCM determined that it was not only more cost-effective but also better for the schedule to use smaller helicopters.

Steel and foam debris were handled by a Northwest Helicopters’ Huey with a load limit of about 3,500 pounds. Consequently, the dock needed to be cut into precise sections that weighed a certain amount to ensure safety of ground crews and pilots.

Scheduling this project was difficult as NCM was only able to work during low tides and helicopter flights were weather dependent. With rapidly changing weather a factor, the contractor had to have emergency provisions available for crews should they be stranded on the beach for several days.

The project was completed on budget and with no accidents or injuries.