What can public agencies learn from Bertha’s journey?

Bertha, one of the world’s largest tunnel machines, has encountered well-publicized performance problems on the $1.35 billion SR 99 tunnel contract.

Construction performance problems, unexpected subsurface conditions and disputes are no surprise on large tunneling projects. What is unusual is the public nature of the arguments and positions taken by the contracting parties regarding the cause and allocation of responsibility for some of the construction problems and related disputes.

This public visibility of these disputes provides valuable insight into the approaches and positions taken by the project owner and contractor. This article offers lessons-learned and improved practices for other public and private project owners of construction projects, based on the history to date of the approaches used on the Bertha problems.

These lessons-learned are straight-forward and can be implemented with senior management support and project team commitment. I will focus on the steel casing issue, which has been widely reported in the press. 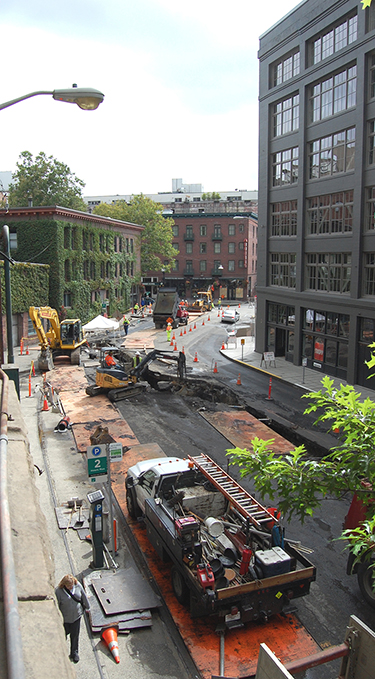 Photo by Benjamin Minnick [enlarge]
Puget Sound Energy last year relocated 2,500 feet of 12-inch-diameter gas line that runs below the viaduct and partially above where Bertha will eventually travel. This section was rerouted to part of Western Avenue.

The SR 99 tunnel is approximately 2 miles in length in downtown Seattle. Digging the tunnel was expected to take 14 months, starting last October.

The public agency selected a design-build project delivery method for the contract, for the stated purpose of allocating risk to the contractor. The public agency provided subsurface information to the bidders, consistent with common practices for tunnel and similar projects.

In early December, when Bertha had traveled approximately 1,000 feet, the machine cut into an 8-inch steel well-casing that had been left in place after a 2002 groundwater study for the public agency. Increased performance problems developed soon after hitting the casing. Damage to bearing seals on the machine was then discovered. Repair work is underway and Bertha isn’t expected to restart until at least September.

Causes and responsibility for these performance problems is under investigation and is likely to be disputed. No claim from the contractor has been filed, but it is expected that a claim will be submitted. I will focus on several claim avoidance practices and lessons-learned that were identified in the press and project reports.

Industry studies by the Construction Management Association of America and the Construction Users Roundtable identified adversarial relationships, ineffective communication and lack of collaboration as contributors to poor results on typical projects. These factors were present on the SR 99 project.

Public statements by the SR 99 project owner confirm that it did limit some technical communications with the contractor in order to avoid the perceived risk of assuming liability for the contractor’s methods, means and procedures. The agency indicated that it selected the design-build approach to shift all or most risk to the contractor, and did not want to undermine that risk allocation.

The Program Expert Review Panel Report, dated Feb. 27, addressed this issue by recommending regularly scheduled open forums for discussion of technical issues. The meetings would provide a method of bringing to bear the collective experience of all parties for the benefit of the project. The panel advised that these communications did not have to involve directions to the contractor and could be done without altering the contract risk allocation.

An important lesson-learned is that public agencies and their consultants can communicate with contractors to address project issues, problems and solutions without going over the line of assuming responsibility for contractor activities. Sharing technical insights and perspectives would be expected to contribute to better problem avoidance and early issue resolution.

A more collaborative communications and problem-solving approach would be expected to benefit the project and its participants. Special skills on the project team may be required to effectively implement these behaviors and practices as these practices are not always available from traditional construction project teams. 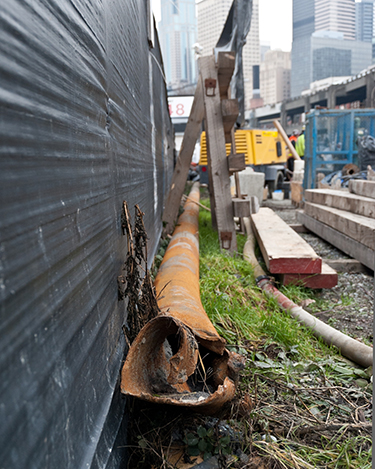 In retrospect, the existing casing would have been important information to make sure the contractor understood.

An anticipated legal and claim issue likely to be addressed is whether the existence of the casing in the tunnel alignment was adequately disclosed in bidding documents. In addition, did or should the public agency have shared any information about the known casing to the contractor after award during construction meetings? These issues can be expected to be part of any dispute and potential claim resolution process.

A lesson-learned is the value of clear communication on important project information, concerns and risks by the project team — so bidders and contractors clearly understand the information, risks and requirements.

Some projects now convene a post-award meeting of owner, designer and contractor representatives to review in detail the key information, risks and requirements to ensure a better understanding of the project prior to construction. The costs and effort of additional steps to clearly communicate important project information is a tiny fraction of the costs of resolving disputes arising from inadequate communication or misunderstandings of key information. 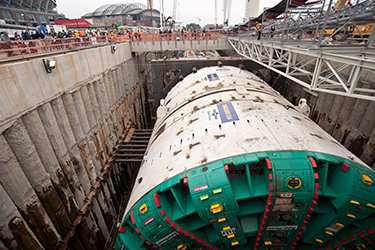 Effective communication on the project team is a core element to successful construction projects. The SR 99 contract provided for a collaborative partnering approach. The project was comprised of very experienced professionals. However, the panel reported instances where communications within the project team could be improved. The panel also reported strained relations between the public agency and contractor, based on perceived slowness in responding to issues, a quickness to make issues public and a tendency to assign blame rather than work together to solve problems.

While the project had in place good communication and administrative procedures, the panel recommended that the team improve its current processes in delivering the project in an effective and efficient manner.

Formal communication reflecting a tone of an adversarial relationship instead of a positive team approach was also identified as a problem area by the panel. The decision to implement senior management partnering and collaboration sessions by the public agency and contractor was seen as a positive step by the panel to address the lack of trust issues observed.

Consider use of neutral facilitation or partnering expertise to expand the project team capabilities.

This article is not intended to critique the approach or actions taken by the parties on the SR 99 project. As a construction neutral with more than 30 years of experience in assessing and resolving construction disputes, the activities, positions and lessons-learned on the SR 99 project are not uncommon. However, the public nature of the statements and positions being taken by the parties does provide an opportunity to identify early lessons-learned and areas of improvement by other public agencies and private owners on their construction projects.

Projects with very experienced professionals and organizations can still improve their practices, procedures and behaviors by considering these lessons-learned to continuously improve their project delivery results.

Ron Leaders is a senior consultant for Contract Solutions Group. Leaders has more than 35 years of experience as a construction neutral, arbitrator, claims consultant and attorney in the design and construction industry. He places an emphasis in claim avoidance, early claim resolution and creative problem-solving dispute resolution with a goal to avoid litigation.