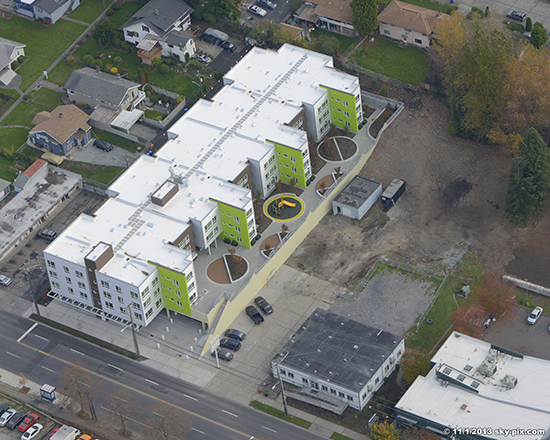 Photo by Sky-Pix Aerial Photography
Emerald City Commons was initially bid four years prior to the start of construction.

Challenges started long before the project began, as it was conceived and initially bid four years prior to the start of construction. Add to that: two clients, both nonprofits needing to stretch every dollar; six funding sources that required different types of documentation; a requirement to use local and WMBE subcontractors (32 percent of money spent on subs was allocated within a 10-mile radius and 48 percent went to WMBE subs); utility coordination with multiple agencies that required no interruption in service to the area; and very limited site access.

Then there was the previously undetected contaminated soil.

Rafn had to get creative to met or exceeded expectations. The contract identified cost-saving options, such as moving the podium to reduce site work and structure costs. The owners took advantage of $298,000 in pre-construction savings, and Rafn credited the owner $110,000 in cost savings during construction.

Sustainability goals were kicked off by bringing in a small herd of goats to clear the land. Materials included 50/100-year building materials, low-maintenance/allergen-reducing stained concrete or vinyl plank floors, and durable carpet tiles with low-VOC adhesives. The units have energy-efficient appliances and open interiors with large windows.

The project was constructed to meet the Evergreen Sustainable Development Standard and earned a Seattle City Light Built Smart Award.

The long and narrow site allowed access only from busy Rainier Avenue and gained elevation on one side. That combined with poor soil conditions had Rafn using a soil nailing system to eliminate the need for easements.

Removal of the nearly 3,000 tons of contaminated soil delayed the project 42 days, but Rafn accelerated the schedule and cut that delay in half. Contaminated soil remediation contributed to more than 90 percent of the change in contract value.

Finally, neighbor relations were crucial to success. To that end, the Rafn team shared plans ahead of time and maintained open communications throughout the project. The contractor rented its project office from Urban Impact in a previously un-rented space, repaired a parking lot and repaved a driveway on adjoining properties, put in a new sidewalk, and retained the south property for use as a parking lot.

The project had no recordable or lost-time accidents during the 17,384 hours worked.