At the University of Washington main campus, Hoffman Construction Co. is building a new station on the Sound Transit light-rail commuter train system where some interesting things are happening underground.

The tracks at University Station will be 110 feet below grade to allow the tunnel to pass just 8 feet beneath the Montlake Cut shipping channel. The new station is adjacent to Husky Stadium, and the majority of the building work occurs underground.

The unique and complex excavation for the construction of the station required the installation of thousands of tons of temporary concrete and steel to brace the perimeter walls of the excavation. Removal of the temporary construction was technical and complicated work. NCM created a detailed work plan and bid the work in December 2010. 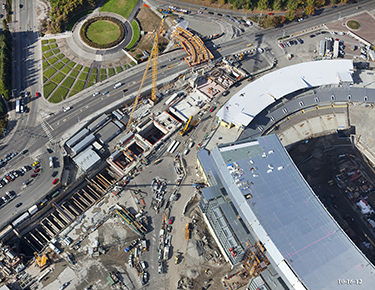 Photo by Soundview Aerial [enlarge]
The new light-rail station is being built next to Husky Stadium. 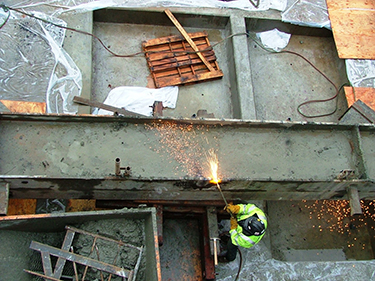 Photo courtesy of NCM Contracting Group [enlarge]
Crews torch cut the beams into smaller pieces so that they could be hoisted to the surface. 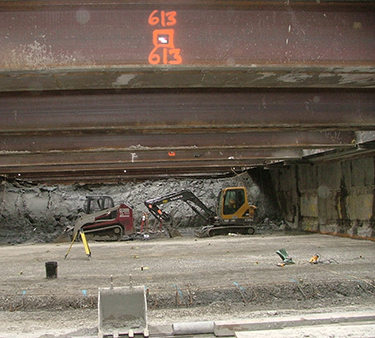 Photo courtesy of NCM Contracting Group [enlarge]
The excavation was divided into two sections: one for tunneling and the other for the light-rail station. Sections were separated by a temporary 4-foot-thick transverse wall. 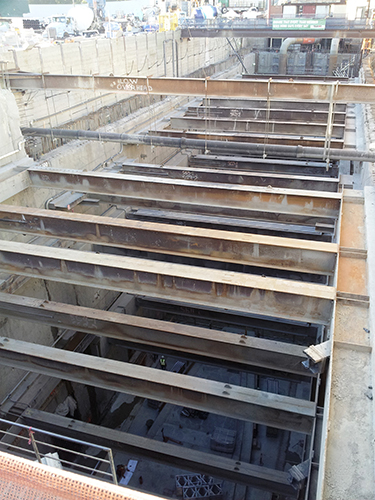 Photo courtesy of NCM Contracting Group [enlarge]
Cross and lateral beams served as temporary braces for the perimeter walls of the excavation.

NCM’s task was to remove the transverse wall and bracing steel.

NCM used a combination of excavators equipped with concrete breakers and remotely operated Brokk machines equipped with much smaller and more precise breakers to remove the transverse wall. The tunneling machine and associated conveyors and equipment were located more than 100 feet below, and in the path of, the falling concrete rubble created by the wall removal work.

To protect the equipment and crews working below, NCM designed, built and installed a protection system anchored to the wall itself capable of catching the material without interfering with the removal work.

After installation of the protection system, NCM’s crews worked in tandem with the advancing excavation crews to cut and break the nearly 7,000-ton wall. Crews paced their removal work to match the excavation progress, allowing the crews to access the slurry wall at the ever-descending elevation of the excavation and avoid costly and cumbersome access platforms. Broken concrete was collected and loaded into crane-mounted skiff boxes for hoisting to the surface.

The skill of NCM’s crews, the coordination with the excavation teams, and the success of the protection system and plan allowed the removal to be completed on time and without interfering with tunneling.

After removal of the slurry wall, construction crews began installing the permanent components of the station’s structural framework. As this construction achieved full strength, the phased removal of the temporary steel bracing began. The largest and most difficult to remove steel beams were at the lowest level of the excavation but needed to be removed first. To accommodate this, NCM and Hoffman hoisted large excavators, forklifts, front-end loaders, and even dump trucks to the bottom of the pit.

The massive steel bracing beams stretched across the excavation to brace the perimeter walls and connected to even larger steel beams running along the face of the walls, creating the temporary support framework. The size and weight of the beams, coupled with the newly installed permanent construction, required the beams to be torch cut into much smaller segments prior to hoisting them to the surface.

Working off of the new structural slabs, NCM crews installed supports along the length of each beam and cut the beams to manageable lengths. As the crane hook was not able to be positioned above the steel, the smaller pieces were rigged and hauled to central locations that the crane could access. Following this process, more than 1,500 tons of steel was supported, cut, moved and hoisted out.

The final piece of the puzzle was the removal of the perimeter bracing steel, or whalers. To ensure full contact of the massive steel whalers to the perimeter walls, crews grouted the spaces between the whalers and the wall surface. This grout, 3 feet thick and embedded with large steel supports in many places, could not be accessed and removed with conventional concrete breaking equipment.

To resolve this challenge, NCM’s concrete cutting teams mobilized a wire saw to cut the whalers free from the wall. This equipment uses a diamond-encrusted wire that can cut through the grout and the embedded steel supports. Once the whalers were free from the wall, traditional equipment could remove the grout from the steel and the beams could be torch cut to length and hoisted out similar to the cross bracing.

Through extensive pre-planning, engineering and partnering with many teams on the project, NCM was able to safely perform more than 13,000 hours of incident-free work on this uniquely difficult and technical project.