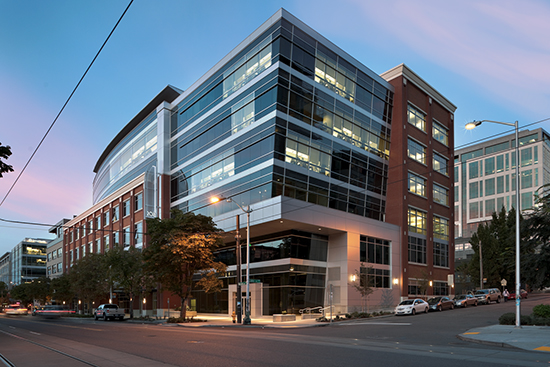 Photo courtesy of Pennon Construction Co.
SME Inc. of Seattle installed electrical and other systems at the 202 Westlake building.

The 202 Westlake building consists of six stories of above-grade office space, retail space on the ground floor and four stories of below-grade parking.

This 130,000-square-foot building was the first speculative commercial project to be built in Seattle after the 2009 recession. Initially proposed, designed and budgeted in 2008, the project went on hold for three years due to poor economic conditions.

Fifteen months into the shell and core work, SME got notice that Amazon was the client and they were to proceed on the tenant improvement for Amazon, which had to be completed within six months.

Not only would the work be impacted by long lead times necessary for procurement, it also required that SME perform much of the work alongside and in some cases, on top of the other shell/core work.

To maintain the schedule, SME worked with the lighting supplier to meet quick rough-in schedules by having fixtures delivered on a just-in-time basis to limit exposure to other construction activities.

SME staffed the project with a superintendent and four foremen each assigned to a particular area: lighting and controls, overhead and HVAC power, wall and floor power, and fire alarms. At times, they elected to use overtime rather than just add manpower to maintain quality control.

SME completed the project on time and within budget despite the compressed deadline. There were no time-loss injuries in 33,558 hours worked.