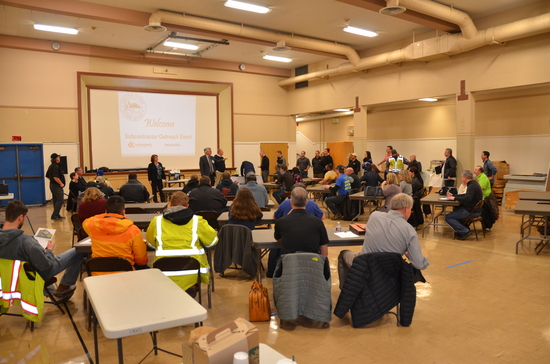 Korsmo used a progressive approach to exceeding Tacoma Public Schools’ diversity-inclusion goals for the Grant Center for the Expressive Arts project. The district’s diverse business-participation goal for the GCEA project was 51%, which included minority-owned, small business, woman-owned, and local business enterprises. Korsmo’s actual diverse-business participation on the project was 85%. The company provided several opportunities for participation from local businesses and trades personnel to ensure that scopes of work and bid packages were created that were mutually beneficial to both the project and local specialty contractors.

While Korsmo expects every member of the team to value and support a diverse workforce on all of its projects, it developed the following value-added initiatives specific to the recent GCEA project that enhanced already-successful outreach and bidding activities:

• While the bid package included the project’s minority- and woman-owned business enterprise goals, Korsmo updated its bid form to include the MWBE percentage goals and requested prime bidders to list participating specialty contractors that would help it meet these goals.

• To encourage partnering of MWBE firms, Korsmo issued an addendum after each bid package was released. This addendum specifically targeted prime specialty contractors and identified MWBE firms that were interested in the project and available to provide services. Korsmo hosted interested firms at its office for a meet-and-greet event to help facilitate these partnerships.

• In addition to its MWBE subcontracting plan, Korsmo developed an internal MWBE tracking tool based on the percentage participation goal, budget numbers and bid package plan. This tracking tool was used to provide status updates to the team throughout the project.

• Korsmo collaborated with The Next Move program, a nonprofit that creates career opportunities and experiences for young adults with diverse needs. Through this partnership, the company created a high school career pathways internship program and selected four Tacoma students to intern on the project while earning high school credits. Korsmo also provided the opportunity for these students to move into a paid summer internship that provided hands-on work experience, soft-skills development and mentorship.

• Korsmo partnered with the Graduate Tacoma program and hosted a full-day construction field trip for students at Stewart Middle School. This field trip exposed the students to all phases of a building project, from design through construction.

• During the preconstruction phase, Korsmo hosted a small-business certification workshop to promote subcontracting opportunities at all levels and to help certify small businesses to increase their opportunities for participation in the GCEA project. Korsmo’s diversity program manager worked with the OMWBE to help 16 companies become certified small businesses as a result.