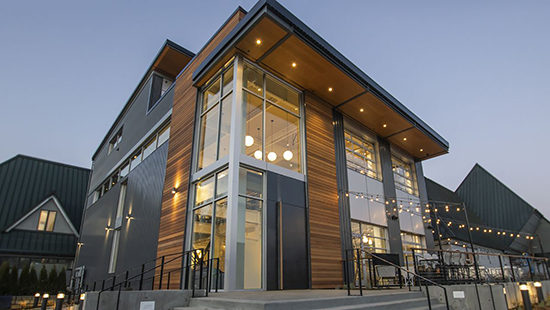 Photo from R|Miller Inc.
DeLille’s new headquarters include a three-story tower with retail space and a rooftop deck.

DeLille Cellars hired R|Miller Inc. to revitalize and expand a 30,000-square-foot facility for its new headquarters in Woodinville, space formerly occupied by Redhook Brewery. The project involved tying in new construction with the existing building, a unique structure with a steeply sloped roof built over 20 years ago. This required selective demolition of interior and exterior spaces and retention of part of the building’s steel frame for incorporation into the new build. A new steel-frame expansion was added to the old brewery area, which was remodeled and converted into a wine-production facility. Existing second-floor offices dedicated to business operations were renovated and a three-story tower was built, featuring retail space and a rooftop deck for private events and wine tasting.