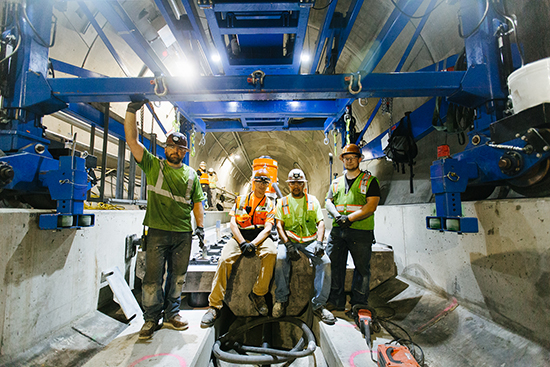 The Northgate Link Extension trackwork from UW Station to Northgate Station (N180) project was a 4.3-mile addition to Sound Transit’s light rail system. Stacy and Witbeck was the prime contractor, responsible for furnishing, installing and testing all trackwork and related elements within two 3.5-mile, 80-foot-deep parallel tunnels and across an elevated guideway between the existing University of Washington Station and the new Northgate Station. The project included construction of more than 7,000 linear feet of track installed on a floating slab system in the tunnels, 3.5 miles of traditional direct-fixation track on plinths (in tunnels, at grade and on an aerial structure), installation of embedded 26-kilovolt traction power cabling, and maintenance-access facilities such as a high-rail access pad, maintenance-of-way spur track, and a cast-in-place concrete stair tower for access to the tunnels from the maintenance facility above.