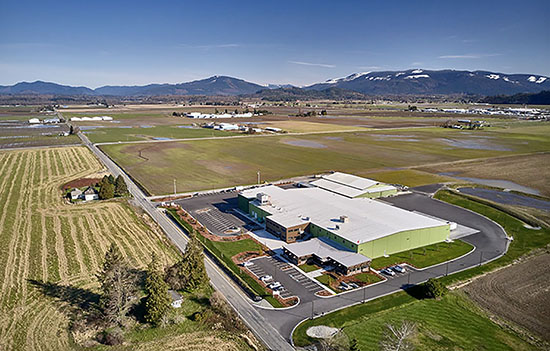 Photo from Trico Companies
The facility was built with slab-on-grade concrete, tilt-up walls and a steel roof structure.

Increased demand for food production and implementation of innovative technologies drove development of a new vegetable-processing facility for Skagit Valley Farm. The farm selected Trico in December 2017 to assess feasibility and lead the conceptualization of the new facility targeted for completion by the harvest season in July 2019. Skagit Valley Farm recognized Trico’s contributions in the Skagit community, as leaders in design-build contracting and for speed of delivery. Trico is at the forefront of sanitary design in the dynamic and highly regulated food industry. The project was designed, permitted and constructed with detailed focus on food safety, flexible spaces, and employee and vendor wellness. The new 87,000-square-foot facility on 19 acres consisted of slab-on-grade with concrete tilt-up walls and a steel roof structure, emphasizing mechanical systems for facility and raw vegetable cooling, including both glycol and ammonia refrigerant systems.