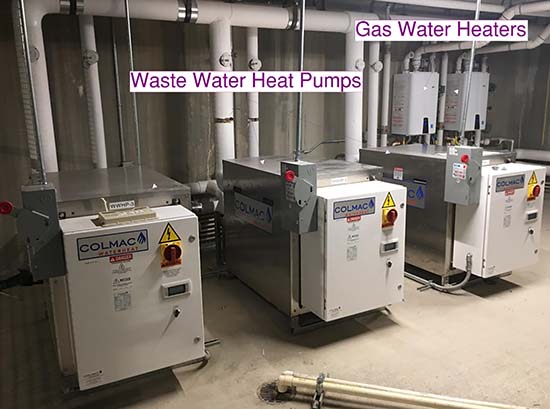 Photo from Exxel Pacific
The heat-recovery system collects wastewater from the apartments and pumps it into a vault.

Block 11’s wastewater heat-recovery system collects wastewater from the apartments and stores it in a vault in the garage. Water-source heat pumps are connected in a closed loop to heat exchangers inside the vault and use the wastewater as a source of energy to heat domestic hot water located in large tanks in the mechanical room, backed up by tankless water heaters. The domestic water-heating system includes the equipment associated with maintaining hot water in the domestic hot-water tanks. A closed loop circulates water between high-efficiency electric heat pumps and the sewage vault heat exchangers. Sensors in the tanks measure the temperature of the water from the heat pumps. If the hot water storage is drawn down too far, natural gas water heaters will kick in to back up the heat pumps. The gas will need to be used to prime the system when tanks start out cold. Under normal operation, no gas is used to run the system.

Domestic water circulates in a loop through the heat pumps, where it is heated, then stored in tanks 1-6. Tanks 1-5 are mainly back up to tank 6, which is where the water circulating the building is utilized from.

In the circulation loop heating system, hot water is continuously circulated throughout the buildings to provide for quick hot water delivery to all apartments. The water temperature in this loop is maintained between 110 and 122 degrees F by an air-to-water electric heat pump or reverse cycle chiller (RCC) in the garage. The RCC takes in air from the garage and creates energy to heat the water. Tank 6 is where water from the other tanks, water passed through the RCC and water circulating from the fixtures in the building meet before being recirculated through the fixtures.

In the sewage management system, ejector pumps are used to empty the sewage vault each day at 4 a.m. into the city sewer system. The water level is automatically pumped out until there is only 3 inches above the heat exchanger. This equals about 10 feet of sewage remaining in the vault. All of the sewage may be manually pumped, if needed.

The system, designed by Ecotope and installed at the Block 11 project by Exxel Pacific, is the first to be installed in a residential building in the U.S. It aligns with the city of Seattle’s goals for decarbonization, because under normal operation it does not use natural gas. The system was designed to be roughly 70% more efficient than a typical system in a multifamily building.