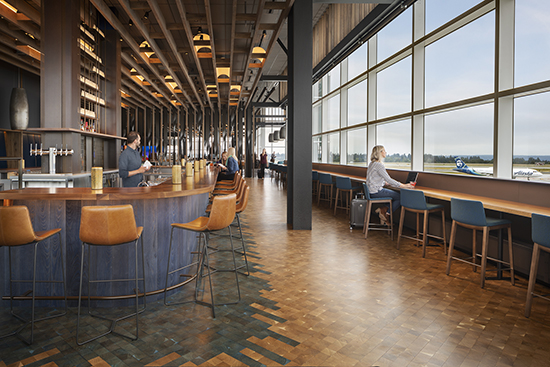 Alaska Airlines’ new flagship lounge at Seattle-Tacoma International Airport presents a distinctively Pacific Northwest style of relaxed elegance around the concepts of “Come In,” “Take a Breath,” “Help Yourself” and “Cut Loose.” The lounge boasts 180-degree views of the runways, the Olympic Mountains and Mount Rainier. The entry to the lounge, “Come In,” is open and welcoming with wood, steel and directionally lit walls. The western end, “Take a Breath,” is a calming place to work and features upholstered seating and a freestanding polished concrete hearth with a custom-blackened steel flue. The center of the lounge, “Help Yourself,” hosts a casual dining area with a canopied bistro. A large walnut bar encourages guests to relax, interact and “Cut Loose.” The project is comprised of a 16,000-square-foot build-out within the active North Satellite modernization project including restrooms, a prep kitchen, office, and mechanical and electrical spaces. It was built on a fast-track, nine-month schedule.