How to keep safe while working in a deep hole

We work in a schedule-driven world, where more and more subcontractors share limited site space in the name of efficiency. In order to keep a small space safe when filled with different teams and heavy machinery, communication is most important.

Subcontractor coordination needs to start before anyone steps foot on the jobsite.

Before entering the site, a subcontractor should provide the general contractor with a site-specific safety plan, including the scope of work, a job hazard analysis (a step-by-step breakdown of tasks to be performed, associated hazards and how to mitigate or remove the hazards), a fall protection plan, emergency response plans, and general safety and disciplinary procedures. In return, the general contractor should review and approve the plan, and provide additional documentation and plans if there are special hazards to the site, such as soil/air contamination.

Another aspect to be considered before entering a site is training. Are your people adequately trained to safely deal with anticipated hazards on site?

In Seattle, we hit contaminated soils often during excavation, so I prefer our Seattle workers be Hazwoper 40 trained, as well as any other applicable training to the job. In excavation, this typically includes trenching and shoring, confined spaces and first aid training.

Monitoring employee training and staffing the job from the beginning with the most qualified personnel for each project can prevent a number of injuries, and saves pulling the workers out mid-job for certifications. 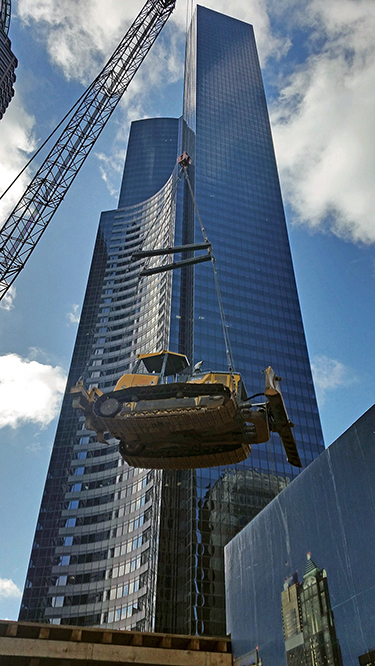 Photos by Tony Perrotti/J.R. Hayes Corp. [enlarge]
A crane was needed to lower a bulldozer into this deep excavation in Seattle.

Once on site, the general should have all the subcontractors who will be working in the same space meet for a preconstruction planning meeting, where a three-week job schedule and sequencing can be outlined. Subcontractors should be willing to work with one another for sequencing, and the general should facilitate these meetings weekly. This can prevent fights for space, and sequencing is incredibly important in modern construction, where accelerated job schedules force greater numbers of subcontractors to share spaces that are consistently getting smaller.

Ideally, all subcontractors and the general should do a daily huddle where each crew outlines the day’s work, the space they will need throughout the day, and any assistance that they can provide one another. They need to make other subs aware of any extra dangers associated with the task, as well as blind spots, fall hazards and pinch points.

Each morning, I require my workers to do their own pre-task plan, which includes a checklist and a small job hazard analysis of the day’s activities. This makes the workers aware of the risks they face daily, and serves as a signed log of ongoing employee training.

In this cross-sectional world, communicating jobsite risks to public servants is a necessity as well. On a job where we will have fall risks, it pays to bring the fire department on site and let them plan a rescue should one become necessary.

At JR Hayes, we also invite local fire departments to our company office pit to give them a chance to practice live rescue drills on trench collapses, hazardous atmospheres and trapped personnel. It gives them an opportunity to become familiar with our operation, and allows for hands-on practice before it is necessary.

Additionally, the city must be notified for road closures, diverting traffic and permitting. When breaking ground, all subcontractors must call in their own utility locates, and with sensitive excavations (near live lines or communications cables) the subcontractor should have the utility’s personnel on site while working in proximity of the line.

Finally, safe site communication between subcontractors and the general contractor would not be complete without including the neighboring community. Workers should barricade the site, check for areas where the public could walk on site, and plan to tell the neighbors before particularly loud or disruptive phases. 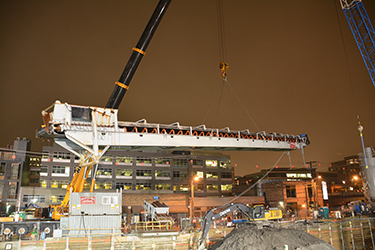 [enlarge]
Installing the conveyor on the Block 52 project in Seattle required a late night street closure and careful planning between crane operators, general contractors and subcontractors. 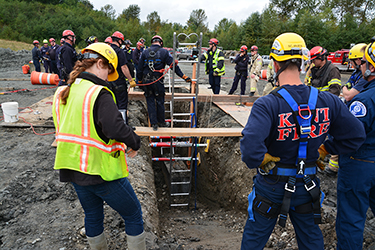 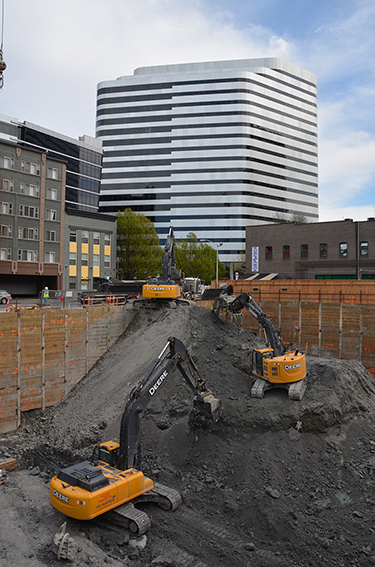 [enlarge]
Operators worked together to move dirt out of the Kinects project hole in Seattle.

When JR Hayes has joined with various contractors for deep hole excavation in downtown Seattle and South Lake Union, the general contractor typically requests all of our safety paperwork a least a month prior to start for review and approval.

We use three-week schedules created with the general contractor and the subcontractors to sequence the job. Most jobs require installation of a 120-foot-long conveyor belt to finish excavation, and sometimes a secondary belt for deeper holes.

This process has gone smoothly due to intensive communication with the city, general and subcontractors; we’ve benefited greatly from general contractors who allow us to be the experts in our field by providing our own signage, lock out/tag out program and weekly safety audits.

Often on our Seattle projects we hit contamination such as underground storage tanks holding petroleum products, general waste, or contaminated ground water. It is vital that the general contractor communicate these risks to the subcontractors so they can work together to protect their workers through avoiding cross-contamination of the site, educating workers on how to protect themselves from the contaminants, and monitoring hot spots in order to change risk levels as needed.

Sequencing work around the different subcontractors is a difficult, but necessary part of the process. We delineate (mark off with candlesticks and tape) under our conveyors or in the swing radius of a machine if it will operate in a fixed space for a period of time.

While having night and day crews can bring its own set of complications, if done well it can limit the number of people occupying the same space on a jobsite. Those daily all job meetings and pre-tasks can be the difference between a smooth day and broken equipment or injured people.

Space on construction sites is getting harder to find, and without detailed planning and communication, it isn’t possible for multiple subcontractors to safely share a deep hole. The steps can seem repetitive, but without daily multi-sub planning of each phase, processes will start to overlap in disastrous ways.

Effective communication between everyone on site makes the job safe, and saves money and time in the long run. In modern construction jobs, it takes a community effort starting on the jobsite and extending out to the public to send everyone home safe at the end of the day.

Shonnessy Gilmore is safety director for JR Hayes Corp., a site development company based in the Puget Sound. She holds a master’s degree in public health in environmental and occupational health from the University of Washington.