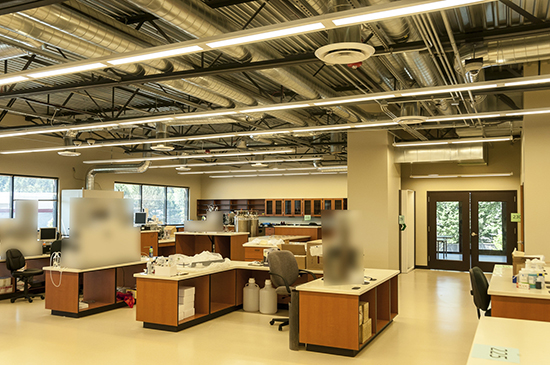 Photo from Donovan Brothers Construction
The main lab has a wide double door so that equipment can be brought in.


US BioTek Laboratories, a specialty medical testing company, can identify an individual’s hypersensitivity reaction to food and other allergens from a single drop of blood.

After its original design team could not meet budget demands, US BioTek hired Donovan Brothers Construction and Akiyama Architecture to provide a cost-effective building for its new world headquarters in Shoreline. The team’s redesign saved more than $1 million.

The project included demolition of an existing strip mall for the construction of the 20,000-square-foot, two-story concrete tilt-up laboratory and office building. During construction a popular 7-Eleven store and restaurant remained open, complicating right of way and parking lot improvements due to extensive foot and auto traffic.

Construction challenges included the need to repair a rock retaining wall that lined the back of the property and to correct the grade of the slope above the wall. The site constraints also meant that crews had crane access to only one side of the building pad where an underground vault and casting slab were located — resulting in only two possible crane placements.

The owner’s major requirements for the building were noise abatement and second floor lab access. Because the building has an exposed structure, Donovan chose a Verco acoustical roof deck with batt insulation for sound attenuation. To limit vibration from the elevator and mechanical rooms, crews cut and filled an insulation joint in the wall and installed double frame, double layer sound walls and acoustical panels.

US BioTek’s main lab is on the second floor, requiring it to move equipment from outside using a forklift. The design team installed a seamless double door system that can be accessed from the inside of the building, allowing forklift access.

To accommodate future expansions, lines for water, nitrogen, compressed air and deionized water were plumbed through the floor. Battery back-ups were installed on critical equipment in case of long-term power loss.

Donovan completed the project on time and on budget with no accidents for the 8,905 hours worked.