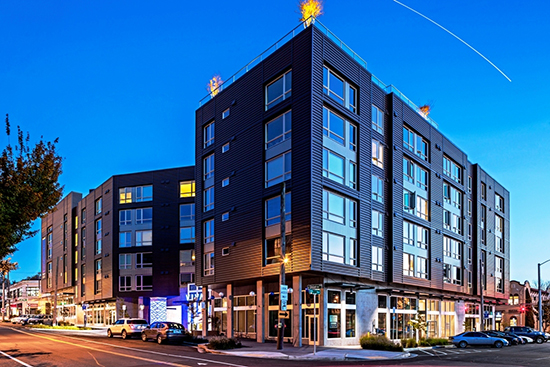 Photo by Francis Zera
Viva was built on a tight Capitol Hill site.


Viva is a 105-unit apartment building on a 14,000-square-foot triangular lot at the intersection of Union and Madison streets in Seattle.

The six-story building has two levels of underground parking, street-level retail space and five levels of apartments above. The structure was constructed with three levels of post-tensioned concrete and five levels of wood framing. Its exterior cladding system includes a fluid-applied air and water barrier extending over the entire building surface, metal panel siding, and a storefront glazing system at the retail level.

Challenges started early during excavation, when a number of unknown underground structures were found and had to be removed, impacting the schedule and extending excavation into the wet winter months. The site had also been home to a gas station, leaving contaminated soil that needed to be removed and remediated.

The site, in the heart of Capitol Hill and bordered on all three sides by busy arterials, had minimal space for staging, storage, or lay down during construction. Using the right of way meant renting it from the city at a premium price, so Synergy mitigated that cost by limiting the rented space to a single length of the project site and kept the remaining two sides open for pedestrian access.

The owner made significant design changes during the project, some that required long lead time deliveries. The team was able to present options to the owner to accommodate design changes to the lobby, modifying door and wall layouts, and adding access control and video monitoring.

The project was completed on time and on budget, and there were no medical or time-loss incidents during 22,400 hours worked.