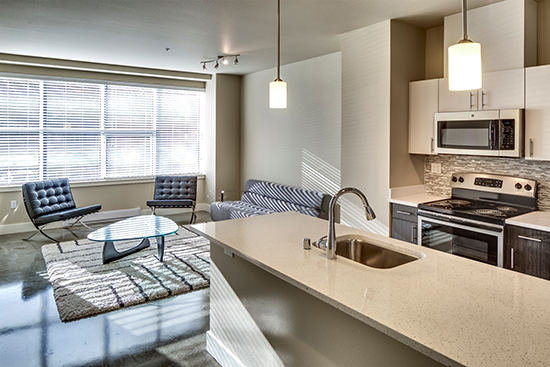 Planning and communication were keys to Synergy Construction completing the City North Apartments renovation in an occupied second floor tenant space one month ahead of schedule and on budget. That was despite the fact that the retail shops below and adjacent apartments were open during construction.

Before core drilling more than 90 holes in the existing 12-inch post-tension deck for electrical and plumbing, Synergy crews analyzed several X-ray images in conjunction with radar imagery. That process successfully avoided any incidents of drilling into existing tensioned cable. It also gave the team an additional week and enough cost savings to enable the client to switch from P-Lam to much more luxurious quartz finishes.

Drilling was further complicated by the fact that some of the cores weighed up to 25 pounds and could not be pulled up, so they had to be dropped into the businesses below. This feat required careful coordination with the businesses to set up barricades and catch stations, as well as control the mud created in the process.

Synergy’s on-site supervisor served as the single point of contact for those impacted by construction, answering questions and making certain that people were consulted about the work being done.

The worksite was on a busy street corner so both vehicular and pedestrian traffic had to be considered, prompting Synergy’s team members to develop parking solutions for all tenants and an adjacent construction project.

The limited working space and accelerated schedule required all trades to work as one unit. Several safety and installation meetings were held each week so that all trades were oriented to the fluid working environment.

The project was completed on budget, per the original scope, and Synergy was instrumental in saving money for the owner in several areas.

There were no medical or time-loss incidents during the 2,655 hours worked.