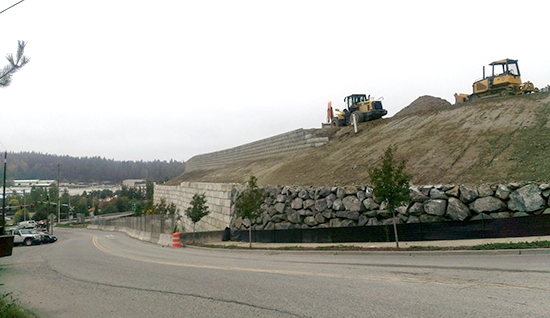 Photo from Donovan Brothers Construction
About 2,500 ecology blocks were reused, saving more than 80 percent of the cost to repair the retaining wall.

Those cost savings enabled Onward Investment to be the winning bidder in bankruptcy court for the property. Then it took two years for the sale to get through the bankruptcy and allow Donovan to begin construction.

The previous owner had done all of the site work and built the 1,200-foot-long, 24-foot-high fabric-reinforced ecology block retaining wall that spanned the entire west side of the property. Due to several storm drainage problems, the site became saturated and the wall began to sag and tilt forward. The parking level above it settled and began to crack, and the northwest corner of one of the buildings had settled and was at risk for structural damage.

Crews worked almost seven days a week for six months to remove more than 120,000 cubic yards of weather-sensitive and wet material that was piled more than 160 feet high. Because of the weather sensitivity of the material and site, the new retaining wall needed to be completed before the winter rainy season.

The 2,500 existing ecology blocks were stockpiled and reused, saving more than 80 percent of the cost of repair that was anticipated by the bankruptcy court.

To solve the unconsolidated fill beneath the building, Donovan injected grout around the perimeter of the building. Working from the outside required only one footing inside the building to be treated, causing minimal disruption. The one day of inside work was done on a Saturday, making the fix cost-effective for the owner and avoiding disruption of the tenant’s operation.

Once the wall work and grading were complete, Donovan rebuilt a detention pond and installed a new PVC liner.

The project included installation of drainage and fencing to the existing 26-foot-high rockery wall on the east side, as well as unclogging, videoing and repairing storm drainage piping.

The project was completed on time and on budget. In the 2,566 hours worked there were no time-loss or medical incidents.