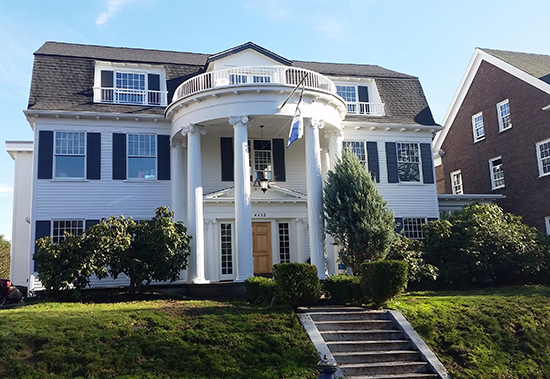 Originally built in 1916, The Charge House, an imposing structure known as the “White House,” was remodeled in the 1960s with an addition.

During the mid-2000s, the fraternity was failing and the building became mainly a boarding house. In 2006, a group of students revived the fraternity, moved boarders out and filled the house with 32 new founding brothers.

The XI Deuteron Group, the national order of the Theta Delta Chi fraternity, hired Express Construction Co. to fully renovate the house during the summer months.

Project challenges began with few records, specifications and architectural drawings. That — coupled with a dense urban location with difficult access, no laydown area, minimal parking and a limited budget — made the project challenging.

The $573,000 budget was only an exterior skin/roof subset of the original $2 million proposal. Express was contracted to replace the exterior skin with HardiePlank siding and add new windows, a front door, roof and deck rail system. It also was tasked with renovating the exterior wood entry facade.

All this was done with the added challenges of working in an urban area that attracts pranksters and homeless people, requiring security 24 hours a day. Material delivery was during off-peak traffic hours on a just-in-time schedule and trades were scheduled to finish work before new deliveries were made.

The building now meets seismic requirements and the team found sustainable materials that maintained the historical integrity of the house.

Express completed the project with no accidents in 1,177 hours worked.