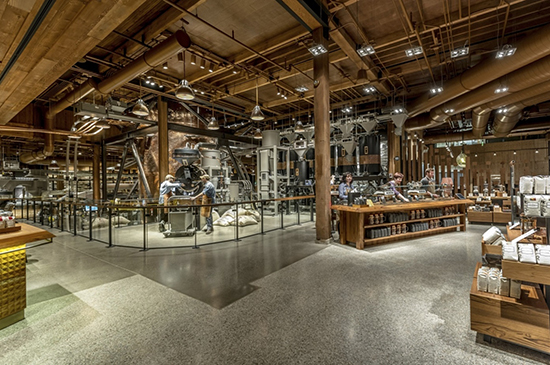 Photo from Ski’s Painting
Ductwork was painted to match the stained ceiling inside the 1920-vintage building.

The 1920 building that became the new Starbucks roastery previously housed a number of auto dealerships on Capitol Hill. Converting the building required contractors to take the interior of the building down to the bare structure, bringing it up to current code.

The project created Starbuck’s fifth roasting plant that is coupled with a high-end retail venue.

The team applied a clear sealer to the concrete walls and painted all gypsum wallboard surfaces multiple times during the project due to color changes decided by the designers.

Ski’s painted all the ductwork and associated cloud items at the ceiling — including the massive amounts of power and data conduit running to the equipment — with a color matching the stain of the reclaimed ceiling.

Due to multiple installations of various electrical, mechanical and plumbing items, the team had to re-mobilize almost daily throughout the four months to paint additional items installed out of sequence. This process was extremely challenging due to the staging areas, materials stocked on site and working around other trades.

One of the most labor-intensive portions of the job was in the section of the building where the parking was to be. It consisted of an old two-level wood loft that could accommodate 10 vehicles on each level. Ski’s crews had to hand scrape all the walls and ceiling to remove old peeling paint from the surface. Because pressure washing or power equipment were not allowed, Ski’s used a variety of hand scrapers and wide blades that the crew fashioned to be as productive as possible.

With all the complexity of this project, there were no medical or time-loss incidents in the 3,509 hours worked.