Is your deck designed to handle a crowd?

Outdoor decks are a great way to extend living and entertaining spaces, but they can also be the most dangerous part of a building if not properly designed, constructed and maintained.

Building codes exist to protect public safety, and they require decks to be designed to resist both vertical and lateral loads.

Vertical loads such as from people, furniture and the weights of building materials are well understood and the design is straightforward. However, I teach short courses to engineers and building officials across the nation, and it’s rare to hear of anyone conducting a lateral design of decks.

When structural engineers conduct a lateral design, they check for earthquake and wind loads. The American Society of Civil Engineers publishes a standard, ASCE-7, that gives detailed procedures on how to calculate these loads. Using ASCE-7, it turns out that lateral loads on decks are not significant unless you are in an extremely high-risk region for earthquake or hurricane.

For most of the country, these lateral loads would not control the design of a deck. 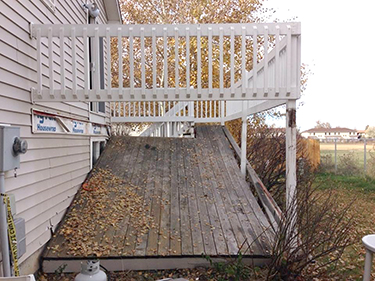 Photos courtesy of Don Bender [enlarge]
This deck failed in 2013 in Bozeman, Montana, with Don Bender’s youngest son on it. Since there were no injuries, the collapse wasn’t reported.

Then we began to wonder about lateral loads that might be caused by people.

It turns out that the building codes and ASCE-7 are silent on lateral loads from people, except for stadium bleachers. So we decided to construct our own decks in our laboratory and it was “all hands on deck.”

We loaded our decks with varying numbers of people representing small gatherings, all the way up to a very crowded condition (full design load of 40 pounds per square foot). At full design load, people are literally shoulder-to-shoulder.

We put the deck on rollers to simulate minimal substructure stiffness (as with posts that are pinned at each end), and then we fixed two corners of the deck to simulate attachment to a building (with sensors to measure the loads). We instructed our volunteers to move in unison side-to-side, simulating dancing or perhaps aerobics. Then we had them run across the deck, jump, and stop suddenly to simulate “horse play.”

The results were startling.

That got our attention and we dug deeper to understand what was causing the problem. The answer is found in a concept called load amplification caused by dynamic movement of the decks. The more flexible the deck with regard to sidesway, the greater the load amplification.

Using computer-based models we found that the amplification can be as great as fourfold. When the deck is stiffened with diagonal deckboard placement or a very stiff substructure, the load drops to lower levels that can be easily resisted.

The most common deck construction has deckboards running parallel to the primary building with the supporting joists running perpendicular to the building. The parallel deckboard orientation does not result in a very stiff deck platform.

When we simulated dancing on a 12-by-12-foot deck with parallel deckboards in our laboratory, it moved 16 inches side-to-side. 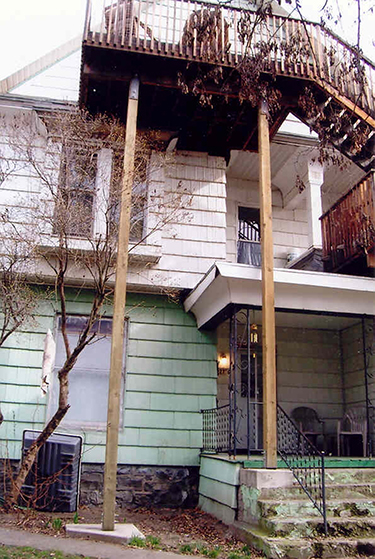 [enlarge]
Many residential decks are built by low-bid contractors that don’t know what they’re doing. This deck is in Lewiston, Idaho.

On the other hand, when you fasten the boards at a 45-degree angle, the deck diaphragm is four times stiffer and six times stronger.

Engineers have known for a long time that if you want to stabilize a structure, you make lots of triangles. Just look at a roof truss and you will see what I mean. Many years ago before plywood was invented, walls on buildings typically had diagonal board sheathing. The triangles helped the walls resist sideways, or lateral loads.

So, we need decks that are stiff to minimize dynamic amplification of loads.

A deck is a structural system consisting of a “structural diaphragm” (the platform made up of joists and deckboards), substructure (post-and-beam framing that supports the deck), and guardrail to keep people from falling over the edge. The lateral stiffness comes from the diaphragm and/or the substructure.

For example, if the deckboards are placed at a 45-degree angle, and are nailed or screwed to the joists, then the structural diaphragm will be stiff and strong, and the substructure’s job is to primarily resist vertical loads. However, if the deckboards are placed parallel to the building, the diaphragm is not very stiff, and the substructure must be reinforced to resist lateral loads, such as with embedded posts, knee-braces or other bracing.

New deck products are constantly evolving, such as wood-plastic composites. These products can be beautiful and low maintenance. Let’s face it, who wants to go out and sand and re-finish their deck each year?

One fairly recent development in wood and WPC deckboards is “hidden fasteners” that fit in a slot on the side of each board. Great idea right? You don’t see the fastener, and the slot allows the board to slip so that thermal expansion and shrinkage won’t cause the boards to buckle.

The problem is that since the fasteners allow slip, the deck diaphragm has almost no stiffness from side-to-side. This means that the deck substructure must provide nearly all of the resistance to lateral loads. This can result in a complicated design that should be performed by a registered design professional.

Two other parts of a deck that require careful design are the attachment to the building and the guardrail posts/infill. One of the best investments you can make for the safety of your customer, family and friends is to employ the services of a registered design professional and regular inspection and maintenance of your deck.

Don Bender, P.E., is Weyerhaeuser Distinguished Professor of Civil Engineering and director of the Composite Materials & Engineering Center at Washington State University. He is an expert in testing, design and construction of timber structures, and is active in building code development.