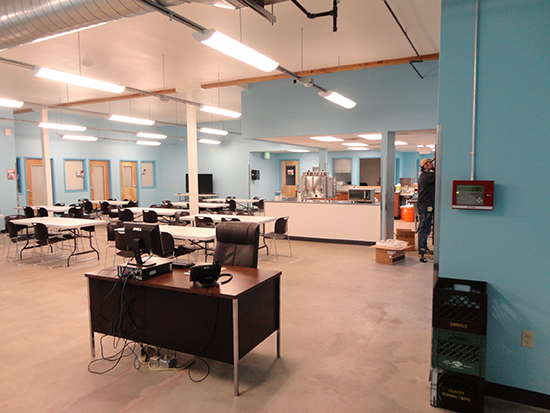 Peter’s Place needed to combine two facilities into one in a 1980s-vintage building in Seattle’s Rainier Valley.

The timeline was just three months and once demolition began the crew found that actual conditions were much different than the original plans. The Synergy team responded to each immediately so that no significant time was lost in the tight schedule.

Seismic upgrades included concrete shear walls running from the new foundation elements through the two floors to the roof.

Heating, ventilation and plumbing systems were replaced to accommodate the common area full of people all day, the 100-plus showers taken daily, and the commercial laundry equipment that runs almost continuously.

Once the project neared completion, the kitchen fixtures, including a three-compartment sink and all cabinetry, were relocated from the former day center and reconfigured to match the requirements at the new facility.

Today Peter’s Place is a welcoming space where homeless men and women can find a path out of homelessness. People can seek refuge, meals, basic services, mental health counseling and nursing, as well as connect with case management, entitlements and other benefits. At night, Peter’s Place opens its doors as a shelter for eight women and 38 men, creating a location for round-the-clock services for the homeless in Seattle.

There were no time-loss or medical injuries during 2,303 hours worked.