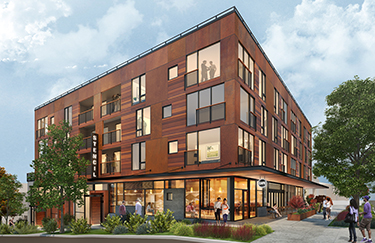 As president of High Country Contractors & Developers, Paul Lyman has found the sweet spot in the Seattle construction industry.

During the 2008 recession and subsequent few years, Lyman said High Country Contractors & Developers scaled back his company size and waited out the tough times.

“We had a couple jobs in our backlog that just carried us through,” Lyman said. “But we had to get smarter about things and reduce our manpower.”

Fast-forward to 2012, and Lyman said he responded to the rebounding economy by ramping up staff levels and expanding the scope of his company’s work.

“There’s just a lot of people building,” Lyman said about the rebounding Seattle economy. “We do a lot of renovations of existing buildings and new construction.”

High Country has profited from the continued build-out in what Lyman calls “secondary markets” with in-fill projects such as Seattle’s Central District. High Country is building a 41-unit apartment building at 2407 E. Union St. called Stencil.

Lyman said interest is building in areas like the Central District because they are a “stone’s throw away” from larger trendy areas and the fact that “everyone wants to live in the Seattle area.”

In West Seattle, High Country completed Elan 41, which is a 78-unit project that included exterior cladding and interior renovation.

The 20-year-old company has toughed-out highs and lows in the local building industry by staying diversified, Lyman said.

“The types of projects we’re doing have a lot higher revenue,” he said, comparing the company’s work today with its work in its early days.

Lyman said the company will continue to expand in the next few years, as it has a diversity of projects in the hopper, he said.