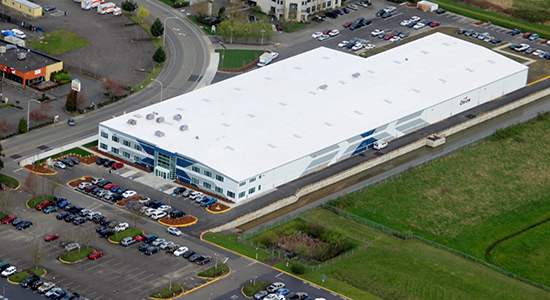 
When Orion Industries decided to move its Federal Way-based company to Auburn, it hired Donovan Brothers to build its new 93,000-square-foot office and manufacturing facility.

The new building is larger and better suited to the fast growing company, named one Boeing’s “suppliers of the year” for 2012.

Orion, a nonprofit organization, had a strict budget. Donovan value-engineered the project by modifying designs to significantly reduce costs.

Redesigning the entry curtain wall was one of the most cost-effective changes. Donovan combined a commonly used storefront system with structural steel to save money and retain the look of the building. A vestibule was designed into the glass entry to create a secure space and help balance temperatures in the large lobby.

Construction began in April 2013 and after clearing the site, the team began a mass excavation for a stormwater detention pond that would line the entire east side of the site. To maximize the building footprint, the slope on the left side of the pond was replaced with a retaining wall made of 1,092 locking Ultrablocks. The depth of the pond, as well as the need to work on the wall from both sides, required installation of three de-watering wells and operation of pumps 24/7 until the wall was complete.

A “notice to airmen” was required by the airport when pouring concrete, tilting panels, setting the roof structure or hoisting was performed inside the flight path. This notice kept construction crews and airport traffic control aware of possible conflicts and safety hazards.

All aerial booms were fitted with red and white checkered flags and blinking lights for airplane safety. All hoisting had to be minimized and accomplished as quickly as possible; the team was able to tilt and secure all 61 concrete panels in just under two-and-a-half days.

Donovan stayed within budget and schedule. There were no time-loss or medical incidents during the 9,928 hours worked.