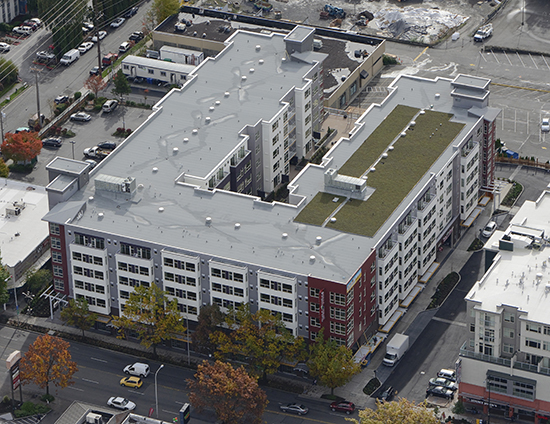 Photo by Sky-Pix
Plants on the roof are in grooved trays that channel water as part of the site’s stormwater detention system.

525 at The Enclave is the second phase of development for Wallace Properties in Northgate. The building has 266 market-rate apartments over almost 25,000 square feet of retail space.

In addition to the overall building, Rafn constructed tenant improvements for Total Wine, which takes up the entire ground floor retail space.

A key factor to the winning project was completing it 74 days ahead of schedule. Much of the time savings was a result of panelizing the building’s walls.

Placement of prefabbed panels was precise and efficient; and allowed for flexible scheduling.

Adding to the efficiency of prefab construction was Rafn’s rental of an adjacent parking lot for its own panel “factory.” Walls were built concurrently with the foundation or concrete podium, then placed and secured much faster than conventional framing. The on-site framing allowed Rafn to complete wall erection and begin roof framing more than a month ahead of schedule.

The main roof and first level terrace have a plant matrix on a cocoa fiber mat laid out in snap-together trays. The trays have grooves that channel water as part of the site’s stormwater detention system.

Common areas have un-tempered clean air circulation. By carefully placing diffusers and balancing the system, Rafn made certain that common areas are comfortable for residents.

Pre-made galley-style kitchens, similar to those in boats, were used in 20 studio units, reducing installation time.

Partitions that divide outside space between units were developed by Rafn superintendent Phil Wheeler. They have planting beds with sun plants on one side and shade plants on the other. Partitions are held in place by ballast in the bottom.

All of the aluminum balconies were craned onto the building and bolted into place in one day.

The unit duct-work was installed in the joists instead of drop soffits, creating a system that is highly efficient and aesthetically more pleasing.

The project was encased in scaffolding with safety netting and permanent fall protection anchors on the roof. There was a heightened safety focus around forklift operations when moving panels from the adjacent factory to the project site; and the site was fenced and gated to protect the large number of pedestrians and auto traffic in the area.

Despite the tight site and heavy area traffic, there were no recordable or lost-time incidents during the 37,133 hours worked.